ANYTHING FOR JACKSON and the 'Possessive' Grandparents 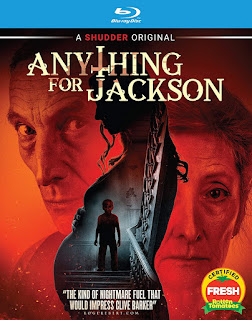 Anything for Jackson begins great. Audrey (Sheila McCarthy) and Henry (Julian Richings) are an elderly couple engaged in congenial, mundane banter one morning. Henry shuffles out the front door, then returns a few seconds later, dragging a screaming and kicking young woman into the house. Audrey helps subdue her with a few whacks to the head with a candlestick before Henry hauls her upstairs.

It’s a shockingly funny scene that has the viewer anticipating a black comedy. But while the film has some darkly amusing moments, it more-or-less plays its premise straight.

It turns out Audrey & Henry are grieving, having lost their daughter and grandson Jackson in a car accident. Though it’s apparently too late to do anything about the daughter, they throw themselves in-league with Satan in hopes of conjuring a demon that’ll allow Jackson to possess the body of another kid. They plan to use the unborn child of the woman they’re now keeping imprisoned in the attic, Becker (Konstantina Mantelos).

However, Audrey & Henry summon a lot more than they bargained for...malevolent demons with vicious mean streaks, resulting in the gruesome deaths of anyone who comes near the house (one poor rube who happily sticks his head into a woodchipper is a gory highlight). Obnoxious fellow satanist Ian (Josh Cruddas) contemptuously informs them they screwed up the ritual and offers to help complete it...for a price.

Though seldom as morbidly funny as the opening scene, the story puts kind-of an interesting spin on a familiar concept. Considering their kindly dispositions, Audrey & Henry are an unlikely pair of satanists, well-played by McCarthy & Richings (two character actors you’ve undoubtedly seen in countless other films). Some genuinely creepy moments - and a few well-timed jump scares - are interspersed here and there, including a particularly chilling sequence involving Audrey and a ghostly trick-or-treater. The final act is a bit of a letdown, partially because the climax succumbs to standard horror conventions, as if director Justin G. Dyck was too timid to confound audience expectations. Additionally, the reappearance of apparitions which spooked us earlier isn’t as effective the second time around. But until then, Anything for Jackson is a decent watch for horror fans.