GUNS FOR SAN SEBASTIAN: A Bad Guy vs. Badder Guys 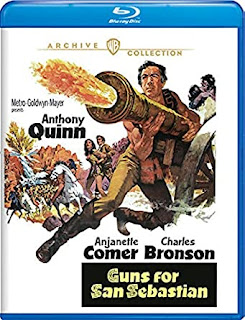 On the run from the Spanish army, outlaw Leon Alastray (Anthony Quinn) is given sanctuary by a kindly priest. For refusing to turn him over to authorities, the priest is reassigned to minister the church of a remote Mexican village called San Sebastian. He also sneaks Leon out with him.

When they get there, the village is dilapidated and deserted, the church in ruins. Soon after, the priest is murdered by a bandit passing through town. When the villagers return - they’ve been hiding in the hills following a raid - they assume Leon is the new priest sent to rebuild the church, despite his repeated insistence he isn’t.

San Sebastian is consistently under siege from both the Yaqui Indians and a band of thugs led by half-breed Teclo (Charles Bronson), who resents the villagers’ religious faith. Leon initially wants no part of this conflict, especially after being threatened by Teclo if he doesn’t leave town - but a headstrong young woman, Kinita (Anjanette Comer), eventually persuades him to lead them in rebuilding and protecting the village (she’s also the only one who knows he’s isn’t a real priest). Calling in a favor from a former lover whose husband is a powerful general, Leon is able to secure an arsenal of weapons and prepares them for the Yaquis’ next attack.

Though the plot is reminiscent of The Magnificent Seven, Guns for San Sebastian is also about Leon’s transformation from nihilistic criminal to something of a savior. Despite his proclaimed atheism and gruff demeanor, he becomes deeply affected by the villagers’ plight. Aside from the climactic battle - which is well-staged, exciting and features a few nifty surprises - Leon’s redemption (for lack of a better word) is the crux of the narrative and Quinn delivers an engaging performance.

While it’s interesting to see Bronson in a rare villainous role, he’s not in the film nearly as much as the billing suggests and all-but disappears by the final act. Additionally, there’s a fleeting - and unnecessary - attempt to throw a bit of romance into the story, with beautiful young Kinita inexplicably smitten by Leon, who’s clearly twice her age. That creepy consummation notwithstanding, Guns for San Sebastian is an entertaining variation of a familiar story, with solid direction and cinematography, the latter of which looks really impressive with this great Blu-ray transfer.