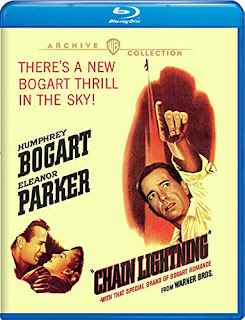 Bogey plays Matt Brennan, a World War II bomber pilot recently discharged from the Air Force. Some time after returning to the states, he’s recruited by Willis Aircraft as a test pilot for a prototype jet (the JA-3) developed by Carl Troxell (Richard Whorf). The plane’s owner, Leland Willis, is anxious to make a big splash with the new aircraft, while Troxell wants to take more time to ensure pilot safety, developing the JA-4, which is equipped with an escape pod.

That doesn’t stop Willis from planning a highly publicized test flight with the JA-3. Matt suggests a nonstop flight from Alaska to Washington D.C., which on-paper looks like a suicide mission. No plane has ever traveled nearly as far - or high - before. Complicating matters is Jo (Eleanor Parker), the girl Matt left behind in Europe after the war ended, who’s now Troxell’s assistant (and perhaps more than that). She tries desperately to talk Matt out of the mission, but he’s not about to pass-up a $30,000 check for the stunt.

Though it certainly doesn’t rank among Bogey’s great films, Chain Lightning (his last for Warner Bros) is a sporadically entertaining potboiler. Bogart doesn’t really stretch himself much, but his natural charisma makes Matt an interesting character not-far-removed from Rick Blaine. However, the romantic subplot is tedious melodrama. Despite an earnest performance by Parker, there’s no real fireworks between them.

But once it takes to the air, the film is a lot of fun. The flight scenes - a combination of real footage and special effects - are terrific, especially the climactic Nome-to-Washington flight, which is tension-filled and gripping. Realistic dialogue and attention to the technical aspects of aeronautics add further authenticity to these scenes. Even Bogey looks and sounds like he belongs in a cockpit.

Somewhat bogged down by soapy melodrama, Chain Lightning is certainly no classic. Still, Bogart’s stoic presence keeps the earthbound scenes somewhat watchable, while the exciting aerial action is sort-of a reward for enduring them.