THERE WAS A CROOKED MAN...Kirk Douglas Butts In 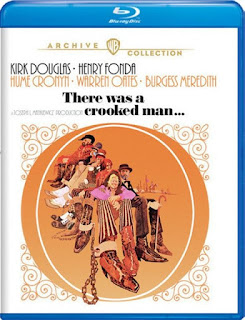 With all due respect, I suspect modesty wasn't something the late, great Kirk Douglas had in abundance.

Not that I'd ever hold that against him. If I had his looks and talent, I’d probably be the most egotistical man on the planet. But of all the legendary hunks from cinema’s classic era, Douglas was one of a handful who not-only continued to be a leading man well-into the ‘70s, he was willing to bare-it-all. Sure, his best films were in the rearview mirror by then, but the fact he appears au natural in There Was a Crooked Man - twice! - at the ripe old age of 54 says a lot about his self-esteem. But as my wife duly noted while we were watching the film, it’s still a pretty nice butt.

And not to outdo himself, Kirk later gave us a glimpse of his 65-year-old butt in Saturn 3. Man, that’s some serious self-confidence!

There Was a Crooked Man is indicative of the films he made in the ‘70s...not particularly memorable, but as revisionist western go, certainly watchable, though the scattershot tone is sometimes perplexing. Kirk and his butt play Paris Pitman, an outlaw who stashes the $500,000 he stole just before he gets caught and sentenced to 10 years in prison. We see several supporting characters whose crimes also get them convicted. The impressive cast of fellow prisoners - including Burgess Meredith, Warren Oates & Hume Cronyn - suggests an ensemble piece, but a few amusing asides notwithstanding, this is pretty-much a Kirk Douglas vehicle.

Pittman immediately starts plotting an escape, promising to split his ill-gotten gains with those who agree to help him. Meanwhile, he has a love-hate relationship with new warden Woodward Lopeman (Henry Fonda), who favors more humane treatment of the inmates than the previous one, killed during a riot. Much of the story takes place inside the prison walls, but it’s sometimes hard to tell what director Joseph L. Mankiewicz is trying to accomplish. The tone is all over the place. One minute it plays like a light-hearted comedy, with Pittman as a laid-back ringleader, then next it’s violent and downbeat. And despite his congenial demeanor, Pittman is a self-absorbed, conniving and ruthless protagonist...certainly not someone we’re rooting for

But Douglas gives his all, as the gratuitous nude scenes demonstrate. Though he shares top billing, Fonda isn’t really given much to do, nor is his character particularly interesting. In fact, he often looks kind-of bored. Still, There Was a Crooked Man is sporadically interesting, features a good cast and comes to an admittedly amusing conclusion.

VINTAGE FEATURETTE- “On Location with There Was a Crooked Man…”. Running 10 minutes, it mostly features co-star Michael Blodgett (a relative newcomer at the time) on-set.