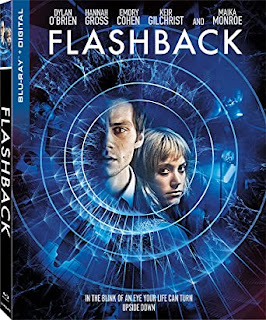 Here’s a little brain bender that’s sort of like a big puzzle with a few ill-fitting pieces, but the finished picture is still pretty cool.

Fred Fitzell (Dylan O’Brien) is a failed artist and troubled twenty-something who lands a pretty decent office job, though he’s far less enthused than his wife, Karen (Hannah Gross). Concurrently, he frequently visits his ailing mother in the hospital, but she no longer recognizes him and doesn’t have long to live. But what’s really eating him are the sudden memories of Cindy (Maika Monroe), a girl he barely knew in high school.

Through frequent flashbacks, we learn Fred, Cindy and a few buddies frequently got together to get high on a designer drug called Mercury. However, after one night when they ingested uncut doses, she disappeared, never to be seen again. Both the drug and Fred’s increasing flashbacks are central to the narrative. Mercury supposedly inhibits the part of the brain that forces a person to exist on a linear timeline. To hear Cindy explain it, being able to simultaneously occupy multiple moments in your life means you’re free to make different life-altering choices than the ones you already made....or will make...

...or something like that. Flashback wisely keeps it unclear if Fred is literally time hopping or simply losing his mind, obsessed with finding out what happened to Cindy that night. His increasingly erratic behavior affects his job and alienates his wife. Or does it? The narrative soon blurs the lines between past & present, real & hallucination, aided by cinematography and editing which makes the whole thing play like a fever-dream.

Flashback is one of those films which demands your total attention, and even then, we are frequently in the dark over its direction. All we know for sure is everything that transpires - past, present and maybe even the future - stems from what happened on one drug-addled night. Though the viewer is often as confused as Fred, his journey intrigues more than it frustrates. Writer-director Christopher McBride allows viewers to try and assemble most of the puzzle themselves, but hangs onto the last few pieces until the final act, resulting in a pretty satisfying payoff.

There are a few pieces left over which unnecessarily extend the finished picture, meaning the denouement goes on a little longer than it needs to. But for the most part, the film is enjoyably complex and visually arresting. Anchored by a great performance by O’Brien, Flashback is a conceptually ambitious puzzle that might even be worth putting together more than once.