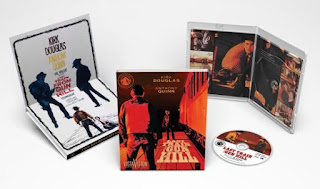 Lauren Bacall once famously said, “It’s not an old movie if you haven’t seen it.”

Words to live by, if you ask me, and one of the biggest reasons I love this gig. For example, ten years of reviewing films from every era has turned me into a big John Sturges fan. I haven’t yet seen everything he's directed and even though I always enjoy a good western, I mostly prefer his thrillers and war films. Still, there’s no disputing the man knew his way around a horse.

Of course, everybody’s familiar with inarguable classics like The Magnificent Seven, but Sturges directed a slew of other oaters, mostly during the 1950s. While they vary in quality, 1959’s Last Train from Gun Hill is an underappreciated gem...and brand new to me.

Kirk Douglas plays Matt Morgan, a town marshal whose Native-American wife is raped and murdered by a couple of drunk thugs led by Rick Belden (Earl Holliman). Recognizing the monogram on the saddle they left behind, Matt takes a train to Gun Hill, a town more-or-less owned by old riding buddy Craig Belden (Anthony Quinn). Belden also happens to be Rick’s father and has no intention of letting Matt bring him back to stand trial.

This obviously drives a wedge in their friendship. Matt is determined to get Rick on the 9:00 train. But with the exception of Linda (Carolyn Jones), an ex-prostitute & Craig’s occasional punching bag, everyone refuses to help him, either out of fear or because they're on Craig’s payroll (including the local sheriff). Basically alone, Matt holds-up in a hotel room with Rick to await the train, while Craig surrounds the building with dozens of hired guns.

It’s a plot similar to 3:00 to Yuma and just as entertaining. Douglas is his usual stoic self, while Quinn has the more difficult task of making Craig an antagonist we somewhat empathize with despite being a ruthless town boss (I mean, he is trying to save his only son from the hangman). Still, we're chomping at the bit for Matt to avenge his wife, especially since Rick is not-only remorseless, he's a hateful, misogynist coward.

A surprisingly dark movie for its time, Last Train from Gun Hill is exciting, fast-paced and culminates with a tension-filled climax. While no classic compared to Sturges’ better-known westerns, it’s nevertheless a terrific film movie worth rediscovering. Available on Blu-ray for the first time, there ain’t much bonus material, but the film is beautifully restored. Packaged with new and vintage artwork, this is another winner in the Paramount Present series.