SIBERIA: Are You Willem and Abel? 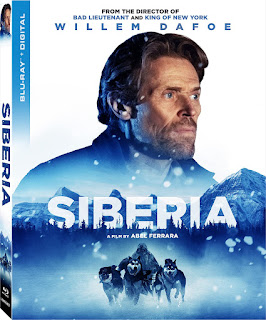 It probably goes without saying that Abel Ferrara has always been an acquired taste. Well, here’s one that might be an acquired taste among the director’s actual fans. Siberia is one of the few films I’ve ever seen where I had almost no idea what was going on throughout the entire thing.

Frequent Ferrara partner-in-crime Willem Dafoe plays Clint, who appears to be an American in self-imposed exile and the sole proprietor of a ramshackle tavern in middle of nowhere (presumably Siberia, though it is never expressly stated). Most of his customers do not speak English, nor does Clint know their language. The only thing made apparent is that Clint’s trying to leave his past life behind, which includes a wife & son

Once Clint drives a dog-sled to a remote cave, anything resembling a coherent narrative - which wasn’t much to begin with - is unceremoniously jettisoned in favor of hallucinogenic set-pieces. Some of them appear to be Clint re-examining his past, including regret over being estranged from his father. However, the only reason we even know that is a brief voice-over during the opening credits. Everything else is a batshit collection of bizarre, violent and/or highly sexual sequences - some morbidly fascinating, others interminable - with nearly no transitions or context. The only discernible thread is Clint’s presence, either as an observer or a participant.

To call Siberia ambiguous is to say Norman Bates is slightly quirky. Featuring a narrative with precious-little exposition, no rising action or anything resembling a climax, it’s a film that’ll have viewers intrigued, bored or frustrated. There isn’t likely to be any middle ground and I suspect Ferrara wouldn’t have it any other way.

Bizarre even by the director’s notorious standards, Siberia is nevertheless well made and visually impressive. With the harsh, cold landscapes underscoring Clint’s isolation, it might even be Ferrara’s best looking film. Whether or not there’s any actual meaning to it all (or entertainment value, for that matter) depends entirely on the viewer. Proceed at your own risk.

ONE EXTRAORDINARILY MISLEADING TRAILER - Then again, I wouldn’t know how to promote this film, either.