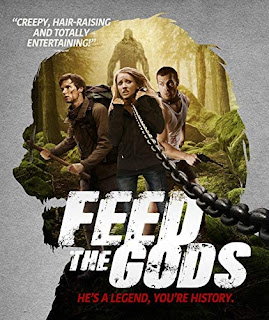 In my neck of the woods, Bigfoot is kind-of a big deal.

But drive 20 miles in any direction and you’ll pass through woodland towns that are little more than glorified KOA campgrounds. The place you might stop to gas & pee also serves as the town’s only supermarket, post office and souvenir shop. On the way out, you’ll undoubtedly notice a big collection of postcards, t-shirts, snow-globes, bumper stickers and the occasional self-published memoir by a local author.

And chances are good that half of the junk created to part tourists with their cash is related to Bigfoot (aka Sasquatch), which each of these backwoods burgs like to claim as their own. Even that local author might have published a fabricated Bigfoot encounter.

But in Feed the Gods, the good folks of Tendale have something different in-mind for tourists. Here, the beast - referred to as “the Wildman” - is considered a God which requires sacrifice. Based on the prologue, they've been doing this for years, but appear to have run out of their own people. It’s never made clear what would happen if they just stop feeding it, nor why they just don’t get the fuck outta Dodge.

At any rate, bickering brothers Will & Kris (Shawn Roberts, Tyler Johnson) think they spotted their missing parents - who supposedly abandoned them as children - on an old video recording of a Tendale celebration. Shortly after arriving in town - with Kris’ girlfriend Brit (Emily Tennent) in tow - they eventually learn what happened to them. Not only that, the few locals left are ready to serve-up these meddling kids as the Wildman’s next victims.

Feed the Gods features pretty good performances and has semi-decent production values for what’s obviously a limited budget. Of the cast, Roberts stands out as the dumber brother, his character responsible for nearly all of the movie’s humor. I especially liked the running gag where Will accidentally keeps killing people. Granted, it’s mostly the right people, but his horrified reactions to his own bumbling are hilarious.

But as funny as that gag is, it is also reflective of the film’s tonal inconsistencies, as if writer-director Braden Croft made a late-inning decision to throw in some comedy. And despite a relatively intriguing set-up, there are a lot of narrative loose ends, most of which surface during the second half. Why do the townspeople videotape the sacrifices? What exactly do the painted red lines and “green tickets” signify? And what the hell did we just watch in the final scene (aside from leaving the door open for a sequel, that is). Not only that, the flow of the film suffers from piss poor editing that gets worse as it goes along. It sometimes seems like entire transitional scenes are missing.

Ultimately, the second half feels like a rush job. Too bad, really, because the premise ain’t bad and the set-up has the viewer anticipating more than just another monster movie. I dunno...maybe they ran out of time, or money...or both. Whatever the reason, Feed the Gods is far from the worst Bigfoot horror movie ever made, but there isn’t a lot to recommend it, either...

...though it would make a better Bigfoot souvenir than a snow globe.

REVERSIBLE COVER - Though they are pretty similar.

MEH. LIKE SHARING THE BED WITH THE DOG.
Posted by D.M. Anderson at 8:51 PM