THE WALKING DEAD: WORLD BEYOND: Emos vs. Zombies 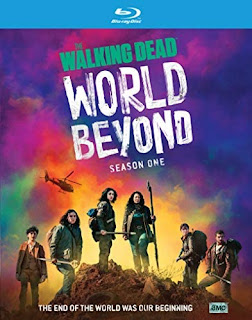 Review by Carl, the Coach Potato😽

I stopped tuning-in to the original Walking Dead on AMC around the middle of Season 5. Too many commercial breaks, too many cliffhangers and the maddening 3-month pause halfway through each season made keeping-up too much damn work. Catching entire seasons on DVD or Blu-ray was a much better option, since the show was naturally binge-worthy. I managed to make it through Season 8 before needlessly padded story arcs, a preponderance of “special” episodes and the wholesale elimination of key characters pretty much killed what interest I had left. Fear the Walking Dead never really grabbed me, so I haven’t been keeping up, though I’ve heard it’s gotten better over the years. I dunno...maybe I’ll get around to it after the oversaturation of zombies in pop culture has finally petered out.

Since I more-or-less stopped paying attention to the franchise - and cable TV, in general - a long time ago, I must confess being unaware another spin-off series even existed. With one season under its belt, The Walking Dead: World Beyond differs a bit from its predecessors in that it takes place a full ten years after the initial zombie outbreak, meaning there’s no narrative or character crossover (so far, anyway).

Season One is a mixed bag. On one hand, it effectively shows how society has slowly learned to adapt - even thrive - during the zombie apocalypse, with three different societies popping up across the country. And for the most part, the story stays on-point, with no asides to focus on a single character for an entire episode. On the other hand, some of the other elements that eventually made The Walking Dead interminable are already here in abundance. Additionally, with its decidedly teencentric point-of-view, World Beyond feels like a blatant attempt to pander to the CW crowd. Only one major character appears to be over 30.

In Campus Colony near Omaha, Iris and Hope (Aliyah Royale, Alexa Mansour) are sisters who grew up after the outbreak. Their brilliant scientist father, Leo, has lent his services to the Civic Republic Military (CRM), the most powerful and enigmatic of the three societies, led by Colonel Kublek (Julia Ormand, the show’s designated senior citizen). Hope is somewhat rebellious and doesn’t trust Kublek, a suspicion exacerbated by a cryptic message from Dad which suggests he’s in trouble and the CRM might have a nefarious agenda.

With two new friends - Silas and Elton (Hal Cumpston, Nicholas Cantu) - in tow, the girls decide to go across the country on-foot to find Dad, a task easier said than done. Not only is most of the country a zombie-filled wasteland, nobody knows the exact location of the CRM colony. The group is later-joined by Campus Colony security officers Felix and “Huck” (Nico Tortorella, Annete Mahendru), who initially try to talk them into returning home, but instead join them on the journey.

The entire series is essentially one long road-trip - mostly on foot (an element that often slowed the original series to a crawl). Somewhat surprisingly, the undead - known here as ‘empties’ - don’t seem to be nearly as prolific, seldom appearing in groups any larger than a few dozen. For better or worse, there are long stretches when they’re mostly forgotten, almost to the point where the characters’ trek doesn’t seem all that perilous. Old school TWD fans will likely be put-off by the comparative lack of undead mayhem. But when zombies do show up, they’re wonderfully hideous, definitely looking like they’re been shambling and rotting for a decade (some even have moss growing on them).

As with other shows in the series, there’s a big emphasis on characters and most of them are fairly interesting (with a lot of emotional baggage). However, the fact that this batch of emos are far more intelligent, complex, philosophical and virtuous than nearly every adult in the cast speaks volumes about the show’s intended audience. Additionally, every episode is hampered by waaaaay too many flashbacks, repeatedly disrupting the flow of the narrative (sometimes right in the middle of the action). Sure, some backstories are welcome - even necessary - but not at the constant expense of the tension.

But even though these 10 episodes wouldn’t have been worth waiting for each week on AMC, Season One is just compelling enough to binge on over a couple of nights. The series lacks an antagonist as gleefully despicable as Negan or the Governor, but the basic story & setting are interesting and the main characters are likable enough that we're generally invested in what happens to them. Just don’t expect much in the way of closure.

FEATURETTES - “A Look at the Series”;  “Meet the Characters”; “The Making of Season 1”