WILLY WONKA & THE CHOCOLATE FACTORY (4K) and the Timeless Reminder 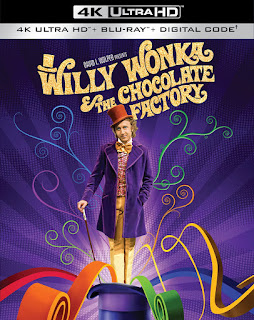 Unless you’ve been living under a rock for the past five decades, you know Willy Wonka & and Chocolate Factory is a perennial classic nearly as revered as The Wizard of Oz. Similarly, it never found a real audience until it began popping up on TV and home video.

Today, you’d be hard-pressed to meet anyone over 20 who hasn’t seen it at least once, and even the internet keeps it relevant through countless memes using Gene Wilder’s condescending smile to call-out various stupidities in the world. Not bad for a movie cynically produced with the initial purpose of selling candy bars (and the author of the original book, Roald Dahl, absolutely hated it).

But despite its humble product-placement beginnings, kid-friendly story, sunny production design and bouncy songs, what ultimately lifts Willy Wonka & the Chocolate Factory above its contemporaries is a singular, timeless message: It ain’t all about you.

Sure, the typical “family” film offers a variety of morals or lessons we experience vicariously through its main characters, and once they learn what’s truly important in life, everyone lives happily ever after. But really, ‘it ain’t all about you’ is the only thing kids should know before being unceremoniously tossed into the real world. Even most adults need to be reminded of that from time to time, which is perhaps another reason Willy Wonka has remained relevant while the likes of Superdad have been relegated to mere nostalgia.

I’ve also always appreciated the film’s sinister underpinnings, with most of its child characters learning these lessons the hard way. No warnings, no lectures...just consequences. Blunt, beautiful consequences.

With the exception of Charlie Bucket (ironically the dullest character in the film), all the children are self-centered, unlikable little brats who’ve obviously never been held accountable for their behavior before touring Wonka’s chocolate factory. One by one, these kids get the unexpected Karmic retribution they deserve. Not only that, the audience is never completely assured they survive. But like life, the factory tour moves on...with or without their participation. If the film was always more about Karma than selling candy bars, then Willy Wonka himself (Gene Wilder at his best) is its confectionery Buddha...always omnipresent, yet wise enough to stand aside and let these people crap in their own nest.

That’s how real life works. Life doesn’t coddle or catch you when you fall. Life doesn’t care “how you roll,” nor will it wait until you’re ready to grow up and stop being a jerk. Life is simply a reminder that it ain’t all about you.

Of course, 50 years of delivering such a timeless message deserves some kind of commemoration, so what better time to give Willy Wonka & the Chocolate Factory a 4K upgrade (especially since previous home video releases have been astoundingly average)? If nothing else, the video restoration is wonderful, the colors less garish and more natural. I can’t say the same for the audio, which has noticeable distortion at times. In fact, I didn’t notice much difference in clarity or balance between this and the accompanying Blu-ray (or my old DVD, for that matter).

Additionally, there are no new bonus features. All the supplemental material here is carried over from previous releases, which is sort-of a shame. At the very least, it would have been cool to include some kind of appreciation or retrospective, especially since the Wonka Kids are now all senior citizens.

Still, Willy Wonka & the Chocolate Factory remains one of the greatest non-animated “family” films ever made, despite its dubious capitalistic origins. Colorful, quotable, witty and loaded with humor both subtle ("Not until you're 12, son") and broad, it’s one of the rare movies that respects its intended audience, yet has always been dark & twisted enough to keep them returning as adults to share with their own kids. After all, you’re never too young or old to be reminded it ain’t all about you.

4K ULTRA, BLU-RAY & DIGITAL COPIES (most of the bonus features are on the Blu-ray only).

AUDIO COMMENTARY WITH THE WONKA KIDS - A pretty charming commentary, with Paris Themmen (Mike TeaVee) providing most of the trivia, while Julie Dawn Cole (Veruca Salt) seems to be having the most fun.

It’s Charley Bucket, not Batch. Other then that this is a good article.

Ooh...good catch. I don’t know how that got past me. Thanks for the correction! -Mr. Paws.