ZACK SNYDER'S JUSTICE LEAGUE (aka the “Snyder Cut”) on 4K Blu-ray & DVD 9/7
The age of heroes is upon us when the Warner Bros. Pictures and DC full-length HBO Max Original feature film “Zack Snyder’s Justice League” arrives on 4K, Blu-ray Combo Pack, DVD on September 7. The screenplay is by Chris Terrio, story by Chris Terrio & Zack Snyder and Will Beall, based on characters from DC, Superman created by Jerry Siegel and Joe Shuster. The film’s producers are Charles Roven, Deborah Snyder, with executive producers Christopher Nolan, Emma Thomas, Wesley Coller, Jim Rowe, Curtis Kanemoto, Chris Terrio and Ben Affleck. In “Zack Snyder’s Justice League”, determined to ensure Superman’s (Henry Cavill) ultimate sacrifice was not in vain, Bruce Wayne (Ben Affleck) aligns forces with Diana Prince (Gal Gadot) with plans to recruit a team of metahumans to protect the world from an approaching threat of catastrophic proportions. The task proves more difficult than Bruce imagined, as each of the recruits must face the demons of their own pasts to transcend that which has held them back, allowing them to come together, finally forming an unprecedented league of heroes. Now united, Batman (Affleck), Wonder Woman (Gadot), Aquaman (Jason Momoa), Cyborg (Ray Fisher) and The Flash (Ezra Miller) may be too late to save the planet from Steppenwolf, DeSaad and Darkseid and their dreadful intentions. The Ultra HD Blu-ray disc of “Zack Snyder’s Justice League” will feature a Dolby Atmos soundtrack remixed specifically for the home theater environment to place and move audio anywhere in the room, including overhead. 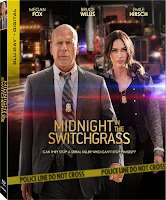 MIDNIGHT IN THE SWITCHGRASS on DVD and Blu-ray 7/27
Bruce Willis (DIE HARD franchise) and Megan Fox (TRANSFORMERS: REVENGE OF THE FALLEN) lead a powerful cast including Emile Hirsch (ONCE UPON A TIME...IN HOLLYWOOD), Lukas Haas (INCEPTION), and Colson Baker (BIRD BOX) in this gritty and intense crime-thriller. While in Florida on another case, FBI agents Helter (Willis) and Lombardo (Fox) cross paths with state cop Crawford (Hirsch), who’s investigating a string of female murders that appear to be related. Lombardo and Crawford team up for an undercover sting, but it goes horribly wrong, plunging Lombardo into grave danger and pitting Crawford against a serial killer in a twisted game of cat and mouse. 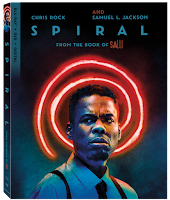 SPIRAL: FROM THE BOOK OF SAW on 4K Steelbook, Blu-ray & DVD 7/20
A criminal mastermind unleashes a twisted form of justice in Spiral, the terrifying new chapter from the book of Saw. Working in the shadow of his father, an esteemed police veteran (Samuel L. Jackson), brash Detective Ezekiel "Zeke" Banks (Chris Rock) and his rookie partner (Max Minghella) take charge of a grisly investigation into murders that are eerily reminiscent of the city's gruesome past. Unwittingly entrapped in a deepening mystery, Zeke finds himself at the center of the killer's morbid game. Spiral, which opened to #1 at the box office and stayed there for two weeks in a row, stars Chris Rock, Max Minghella, Marisol Nichols, and Samuel L. Jackson, and is produced by the original Saw team of Mark Burg and Oren Koules. The film is directed by Darren Lynn Bousman and written by Josh Stolberg & Pete Goldfinger. From Lionsgate and Twisted Pictures, Spiral is a Burg/Koules production. 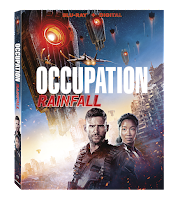 OCCUPATION: RAINFALL arrives on Blu-ray and DVD 8/10
Humans and aliens collide in the race to save mankind when Occupation: Rainfall arrives on Blu-ray (plus Digital) and DVD on August 10 from Lionsgate. Occupation: Rainfall is available On Demand now and is a sequel to the 2018 film Occupation, written and directed by Luke Sparke. Bursting with spectacular special effects and exhilarating action sequences, Occupation: Rainfall unfolds two years into an intergalactic invasion of Earth, as survivors fight back in a desperate ground war. While casualties mount by the day, the resistance—along with some unexpected allies—uncovers a plot that could bring the war to a decisive end. Now, with the alien invaders hell-bent on making our planet their new home, the race is on to save mankind. 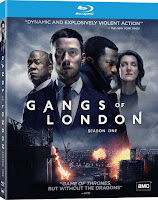 GANGS OF LONDON Season 1 - Available on DVD and Blu-ray 7/20
For 20 years, Finn Wallace was the most powerful criminal in London. Billions of pounds flowed through his organization each year. But now he’s dead – and nobody knows who ordered the hit. With rivals everywhere, it’s up to the impulsive Sean Wallace, with the help of the Dumani family headed by Ed Dumani, to take his father’s place. If the situation wasn’t already dangerous enough, Sean’s assumption of power causes ripples in the world of international crime. Perhaps the one man who might be able to help him and be his ally is Elliot Finch, who up until now, has been one of life’s losers, a lowlife chancer with a mysterious interest in the Wallace family.  But as the wind of fate blows, Elliot finds himself transported to the inner workings of the largest criminal organization in London. It doesn’t end with the Wallaces though, there are shadowy higher powers at play. Gangs of London is created by award-winning filmmaker Gareth Evans and his creative partner Matt Flannery and is produced by Pulse Films in association with SISTER for Sky Studios. The series was executive produced by Pulse Films’ founder Thomas Benski, and Lucas Ochoa alongside Jane Featherstone for SISTER and Gabriel Silver for Sky Studios. AMC will serve as co-producer for the second season.
Posted by D.M. Anderson at 12:00 PM