Robert Altman’s NASHVILLE on ‘Paramount Presents’ Blu-ray 8/10
Following 24 unique characters through 5 days in the country music capital, Robert Altman's Oscar winning epic presents a complexly textured portrayal (and critique) of America's obsession with celebrity and power. Among the various stars, aspirants, hangers-on, observers, and media folk are politically ambitious country icon and his fragile star protégée, a self-absorbed rock star who woos a lonely married gospel singer, a talentless waitress painfully humiliated at her first singing gig, a runaway wife with dreams of stardom, and a campaign guru who is trying to organize a concert rally for an unseen presidential candidate. An essential of 70s cinema, this newly remastered Blu-ray, from a 4K film scan of the original elements, looks better than ever. Includes new & vintage featurettes.

A PLACE IN THE SUN on ‘Paramount Presents’ Blu-ray 8/10
Widely considered one of the finest works of American cinema, Paramount Presents is proud to bring Producer/Director George Steven's masterwork to Blu-ray—remastered from a 4K film transfer in celebration of its 70th Anniversary. Montgomery Clift stars as George Eastman, determined to win a place in respectable society and the heart of a beautiful socialite (Elizabeth Taylor). Shelley Winters is the factory girl whose dark secret threatens Eastman's professional and romantic prospects. This second Paramount Pictures adaptation of Theodore Dreiser's AN AMERICAN TRAGEDY, which was itself based on a notorious true crime tale, was the first film to win the Golden Globe in the category of Best Picture—Drama, before winning six Academy Awards, including Best Director. Also includes new & vintage featurettes.

MORTAL KOMBAT on 4K, Blu-ray & DVD 7/13
MMA fighter Cole Young (Lewis Tan), accustomed to taking a beating for money, is unaware of his heritage—or why Outworld's Sorcerer Shang Tsung (Chin Han) has sent his best warrior, Sub-Zero (Joe Taslim), an otherworldly Cryomancer, to hunt him down. Fearing for his family's safety, Cole goes in search of Sonya Blade (Jessica McNamee) at the direction of Jax (Mehcad Brooks), a Special Forces Major who bears the same strange dragon marking Cole was born with. Soon, he finds himself at the temple of Lord Raiden (Tadanobu Asano), an Elder God and the protector of Earthrealm, who grants sanctuary to those who bear the mark. Here, Cole trains with experienced warriors Liu Kang (Ludi Lin), Kung Lao (Max Huang) and rogue mercenary Kano (Josh Lawson), as he prepares to stand with Earth’s greatest champions against the enemies from Outworld in a high stakes battle for the universe. But will Cole be pushed hard enough to unlock his arcana—the immense power from within his soul—in time to save not only his family, but to stop Outworld once and for all? 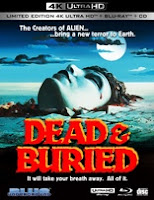 DEAD & BURIED on 4K ULTRA HD 7/20
Something very strange is happening in the quiet coastal village of Potters Bluff where tourists and transients are warmly welcomed, then brutally murdered. But even more shocking is when these slain strangers suddenly reappear as normal, friendly citizens around town. Now the local sheriff (James Farentino of The Final Countdown) and an eccentric mortician (Oscar winner Jack Albertson in his final feature film performance), must uncover the horrific secret of a community where some terrifying traditions are alive and well... and no one is ever really Dead & Buried. Blu-ray and soundtrack CD are also included, and the release will be available with three different covers.
Posted by D.M. Anderson at 9:27 AM