The Daffy Delights of STRIKE COMMANDO 1 & 2 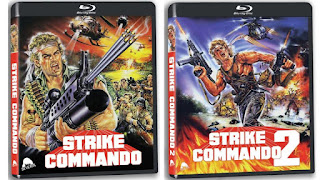 The coolest thing about the late, sorta-great Bruno Mattei is the inspiration he undoubtedly instilled upon countless would-be auteurs armed with little more than a camera and boundless optimism. A particular film by Steven Spielberg (or even George P. Cosmatos) might earn our admiration and respect for the director’s skill, but watching damn-near any Mattei movie will prompt one to say, “Hell, even I could do that.”

I’m pretty sure that’s what Mattei thought whenever he took-in a Spielberg or Cosmatos film. And what he may have lacked in actual talent he more-than made up for with sheer audacity. There was nary a blockbuster released in the ‘80s that he couldn’t regurgitate cheaper and faster, which sort-of made him the Spielberg of Italian rip-off artists.

Which isn’t, of course, intended as criticism. There’s something endearing about Mattei’s attempt to turn Reb (YOR!!!) Brown into a second-tier Stallone in Strike Commando, a deliciously daffy riff on Rambo that damn-near plays like a parody. As Vietnam super-soldier Michael Ransom, Brown delivers all the thespian skills he can muster...awe-shucks grin, trigger-happy o-face, ripping off his shirt every 10 minutes. There are enough bad guys running around the Philippine jungle for three Rambo movies, but traitorous Colonel Redek is by-far the most amusing. He’s overplayed with gusto by Christopher Connelly, hissing each line with his jaw clenched tight enough to crack molars (perhaps because they misspelled his name in the credits).

Whereas Stallone later starred in The Expendables, Mattei & friends must have decided Brown really was expendable because they replaced him in Strike Commando 2 with Brent Huff, who’s even less talented. However, this sequel is ultimately more fun (at its own expense, of course). Comic highlights include co-star Mary Stavin as Rosanna, who looks, acts & sounds like Farrah Fawcett after 20 espresso shots, and several scenes which so blatantly rip-off Raiders of the Lost Ark that I’m surprised Spielberg didn’t put a contract out on Mattei. But the pièce de résistance is the willing participation of seriously-slumming Richard Harris as mentor/adversary Major Jenkins. Even though he’s the only cast member who displays an iota of acting skill, every facial expression practically cries-out, “What the hell am I doing here?” (maybe he was kidnapped or something).

But best of all, these two lovably lousy relics serve as a reminder that, with just a few cases of explosives, plenty of Philippines frequent-flyer miles and no-small-amount of shamelessness, you-too can be an action filmmaker. Maybe you could even coax Brown or Huff out of retirement. I’m sure they aren’t too busy right now.

WAR MACHINE- Interview with Claudio Fragasso who’s either the screenwriter or co-director (!). At any rate, he has some entertaining anecdotes.

ALL QUIET ON THE PHILIPPINE FRONT - Interview with co-writer Rossela Drudi.

GUERRILLA ZONE - Interview with Claudio Fragasso, which is actually the second half of the interview from the Strike Commando disc.

MICHAEL RANSOM IS BACK - Interview with Brent Huff, who fondly recalls working on the film while having no illusions over its quality.