THE GREAT WAR OF ARCHIMEDES: Never Judge a Book by It's Cover 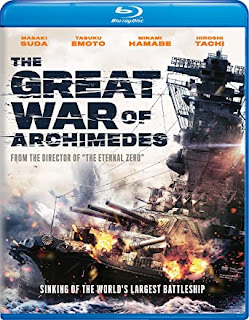 When I was young, stupid and bitten by the “disaster” bug, I sought-out any movie or novel promising catastrophe on a massive scale. One time when perusing the shelves of B. Dalton Bookseller (anyone remember those?), I spotted a novel called The Benedict Arnold Connection. But the title wasn’t what grabbed me (I didn’t even know who Benedict Arnold was). It was the cover, depicting an impossibly huge tidal wave about to wipe-out a coastal city while thousands of people flee in panic. Oh, hell, yes! I snatched myself a copy without even reading the synopsis.

But it turned out the novel wasn’t really about a tidal wave. It was a spy thriller with the threat of a tidal wave. The book was okay, though sometimes too complex for my puny teenage brain and I was understandably disappointed the entire Eastern Seaboard didn’t perish. To coin a cliche, never judge a book by its cover.

Similarly, The Great War of Archimedes isn’t actually a war movie, which is too bad because we need more World War II flicks from a completely Japanese perspective. The awesome cover art depicts the Yamato - one of two massive destroyers specifically built to take-on the Americans - in the midst of battle. That scene occurs in the prologue, with the great ship being decimated by enemy aircraft before sinking. It’s a visually impressive sequence with convincing CGI, prompting the viewer to anticipate some epic scale action.

However, it is the film’s only action scene, which also happens to completely spoil the ending.

A majority of the film consists of Kai’s meticulous research, where he manages to recreate blueprints on his own without being allowed to see those of the proposed supership. His freakish mathematical skills, checkered past and overall dislike for the military make him an interesting character, as are the obstacles he faces while racing against time to complete his findings before the budget approval meeting. However, by showing the Yamato going down in the very first scene, we already know Kai’s painstaking efforts are fruitless and the Navy chooses to fund the super-destroyer anyway, with tragic results. While I understand the desire to start your movie off with a bang, spoiling the ending in the first five minutes is a bone-headed narrative decision. Yamato’s demise should have been the climax, not the prologue.

Like that old paperback I was once duped into buying, The Great War of Archimedes isn’t a bad movie, just not the one suggested by the trailer, cover art and synopsis. The performances are decent and the story has an intriguing premise similar to The Imitation Game, though it’s just a damn shame we’re immediately made-aware it’s all for nothing.