A QUIET PLACE PART II: The Rest of the Story 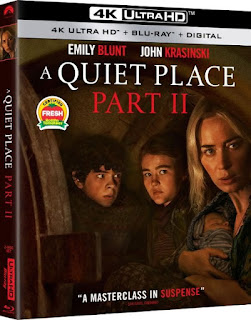 In a genre rife with rip-offs, rehashes and remakes, A Quiet Place was a breath of fresh air. It was a fright flick of awesome simplicity, setting-up its premise with a minimum of exposition before letting the setting, tone and well-rounded characters take care of the rest. The hows or whys weren’t important.

Being a well-deserved blockbuster, a sequel was inevitable, though not really necessary. It also presents a quandary. Do you simply give viewers more of the same, knowing full-well that the novelty of your concept won’t be as effective the second time? Or do you succumb to the temptation of expounding on these creatures’ biology, origins and motives, ultimately diluting some of the mystique that rendered them so malevolent in the first place? After all, weren’t the xenomorphs in the Alien franchise a lot scarier when we knew less about them?

Or...do you go the Godfather II route and create not-so-much a sequel as another chapter of the same story?

John Krasinski makes a wise choice with the aptly-titled A Quiet Place Part II. After a thrilling flashback prologue showing “Day 1,” it picks up immediately where the first film left off. As such, the narrative unfolds on the assumption viewers are already aware of the events leading up to this point, including the ultimate fate of Lee Abbott (Krasinski), as well as daughter Regan’s (Millicent Simmonds) discovery that her hearing-aid, when amplified, is a powerful creature deterrent.

The surviving Abbots, Evelyn (Emily Blunt), son Marcus (Noah Jupe), Regan and their unnamed newborn baby leave their decimated home for a perilous trek to find safe refuge. They come across former neighbor Emmett (Cillian Murphy), who’s been hiding in an old mill. Having lost his own family - and pretty much any hope of surviving much longer - he’s reluctant to offer protection. When Regan interprets an old song repeatedly playing on the radio as a signal, she learns the station is on an island - perhaps free of the creatures - and sets-off on her own to find it.

When Evelyn discovers Regan has left, she insists Emmett go out to bring her back. However, when he does find her, Regan convinces him getting to the island is possible if they can just find a boat. Meanwhile, Evelyn must leave the mill to find oxygen for the baby and medicine for Marcus, whose leg was injured in a bear trap. While she’s out, Marcus accidentally attracts the attention of the creatures, putting himself and the baby in danger.

Speaking of which, Marcus graduates from being merely timid in the first film to irritatingly stupid and shrill in this one. However, I think that’s intentional, to counter Regan’s character growth as both a problem solver and leadership role left vacant by her father. Despite Evelyn’s maternal protectiveness and Emmett’s latent heroism, Part II is ultimately Regan’s story more than anyone else’s.

Elsewhere, the film delivers levels of suspense similar to the first film, with several tension-filled set-pieces pitting these characters against the creatures, as well as a deadly encounter with another group of survivors. Once again, the use of oppressive silence is used to great effect and, other than revealing one key weakness, Krasinski wisely avoids developing the creatures any further than what was established in the first film. They remain as mindlessly aggressive & nasty as ever...though not as uniquely terrifying this time around because we pretty-much know what to expect from them.

So while not quite as fresh as the original, A Quiet Place Part II is a worthy follow-up. By continuing the same story rather than contriving a new one, we’re already invested in these characters before a single monster shows up. Dedicated performances, strong characters and continued narrative simplicity make it a better-than-average horror sequel...if you still want to call it one.

FEATURETTES - “Director Diaries with John Krasinski”; “Pulling Back the Curtain” (where Krasinski explains his take on the creatures); “Regan’s Journey” (Simmonds discusses her character) ; “Surviving the Marina” (a breakdown of one of the bigger action scenes); “Detectable Disturbance” (visual effects & sound design).