Stay Out of ROOM 9 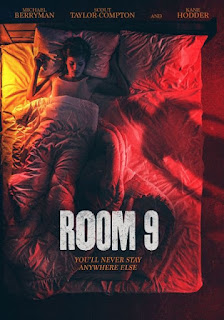 For reasons probably known only to writer-director Thomas Walton, most of Room 9 is shot and edited like the opening title sequence of Seven. Shaky video, jagged cuts and intentionally distorted images may have been cutting-edge 25 years ago. But here, it’s a parlor trick that serves no discernible purpose, save for maybe trying to mask a murky narrative, lethargic pacing, amateurish performances and an overall inability to frame an interesting shot.

The film begins with a prologue showing the brutal murders of a couple at the hands of a half-dozen zealots operating under the tutelage of their loony patriarch. Fast forwarding 40 years, those same guys - along with a few hapless twenty-somethings - are being abducted, tortured and murdered by an unseen - but not unheard - man with revenge on his mind. On occasion, a dedicated detective pops in-and-out of the story to provide commentary at a murder scene, though we never actually see him doing anything resembling police work.

Speaking of characters, I don’t think any of them have more than 10 total minutes of screen time. One is introduced, then briefly engages with another peripheral character before disappearing altogether or getting strapped to a table and spiked to death. Then it’s on to the next victim. Case-in-point...horror icon Kane Hodder is prominently billed, but his entire role consists of being released from prison, drinking with an old buddy and picking a random fight with bikers. In the very next scene, with no foreshadowing or transition, he's murdered. As for the other horror hero in the cast, Michael Berryman is even more gratuitously inserted, showing up in intermittent flashbacks to spout gobbledegook about God and sin. At no point does he interact with any other characters.

But not-only is Room 9 criminally padded-out with meandering scenes and banal dialogue, its technical aspects are just a few steps removed from a home movie, like some of the no-budget garbage that used to take up video shelf space in the ‘80s, made by would-be auteurs armed with one camera, one mike and a handful of buddies willing to work for free beer.

Viewers able to make it to the final act are rewarded with a climax that not-only reveals the ridiculous reason the first couple was murdered in the prologue, but a truly WTF confrontation between the red herring killer and an obligatory ‘final girl’ (who doesn’t even appear in the film until then). Even with seriously tempered expectations, Room 9 is a vapid excuse for a horror film, despite post-production efforts to jazz it up.

BLEH! LIKE COUGHING UP A HAIRBALL.
Posted by D.M. Anderson at 4:20 PM