SILAT WARRIORS: DEED OF DEATH and the Rude Interruption 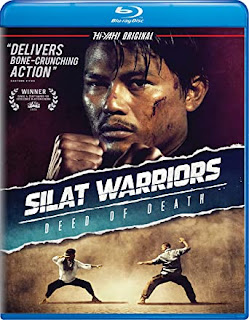 Mat Arip (Fad Anuar) is a cocky, irresponsible, self-centered gambling addict who gets in over his head with loan shark Haji Daud, even using the deed to his family’s land as collateral. When he can’t pay his debts - which Daud’s henchmen have already made difficult - it’s up to Mat’s brother, Ali (Khoharullah Majid), and sister, Fatimah (Feiyna Tajudin), to prevent this gang from taking everything they own.

With family patriarch (Pak Nayan) content to idly philosophize, smoke cigarettes and endlessly defend his inability to hold Mat Arip accountable for anything he’s ever done, the two siblings start kicking ass to save their brother, who eventually gets kidnapped by Daud’s gang.

Here’s the problem: At no time does Mat Arip display an iota of remorse for his actions, concern about his increasing debt nor any indication that he plans to quit gambling. He doesn’t apologize for risking everything the family has worked generations to attain. Even when Dad gives him bus & lunch money to go into town so he can sign over the title to the car he lost after losing a street racing bet, Mat Arip doesn’t offer so much as a thank you.

Here’s another problem: The viewer is forced to spend so much time watching Mat Arip fight, race, gamble and repeatedly fail at all three that we’re led to believe he’s the main character who will eventually fight his way out of trouble. But then the narrative suddenly shifts focus to Ali & Fatimah, who until now have been peripheral characters, with Ali mostly gabbing about God. Eventually, even Fatimah disappears from the story, leaving Ali to take-on dozens of foes in martial arts combat.But the biggest problem with Silat Warriors: Dead of Death is how it's put together. Of course, it’s the action that matters most with films like this and the fight sequences are competent, though a little too choreographed and increasingly rote. Worse yet, first-time director Areel Abu Baker repeatedly cuts away mid-scene to show Ali discussing his faith, Pak Nayan gazing introspectively out a window or black & white flashbacks of the kids’ childhoods, before resuming the action. Until the big showdown at the climax - Ali dispatching thugs one-at-a-time - not a single fight or street race is presented uninterrupted. Again and again, we’re sucked out of the moment just as the action’s getting interesting.
Hence, the film never finds any kind of rhythm. That, coupled with a static narrative, too much spiritual sermonizing and the misguided expectation that Mat Arip’s fate is something anyone will care about, makes Silat Warriors: Deed of Death a chore to endure. Competently-executed fight scenes are not enough to make it worth the effort.

MEH. LIKE SHARING THE BED WITH THE DOG.
Posted by D.M. Anderson at 5:06 PM