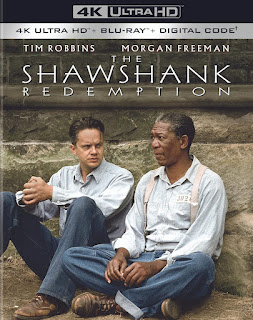 One of my daughters is a high school senior who’s taking a class called Film & Culture, where they’re currently learning about the National Film Registry, a branch of the Library of Congress that determines which titles are chosen for preservation due to their cultural, aesthetic or historic importance. When this new 4K UHD release arrived for review, she excitedly stated it was one of the films selected.

I actually didn’t know that, but wasn’t really surprised. Few modern films which initially played to empty theaters have had a bigger, more enduring cultural impact than The Shawshank Redemption. Over the next two decades, it became one of those movies everybody rented, and whenever it showed up on cable TV - which was, like, all the time - who didn’t pause to catch a few scenes while channel surfing?

Today, Shawshank remains supremely rewatchable and eminently quotable. It’s the film we most-associate with Tim Robbins, Morgan Freeman and director Frank Darabont. With the possible exception of Stand by Me, it is arguably the best thing ever adapted from a Stephen King story. Having already seen the film at least a dozen times over the years, I initially only intended to pop-in the disc just long enough to assess the new restoration, but damn, if I didn’t once-again get sucked into this timeless tale of bromance all the way ‘till the closing credits.

As far as preservation goes, Warner Bros has also done their part. Aesthetically, Shawshank was never a movie that was brimming with visual highs and lows, but the 4K transfer is a big improvement over previous Blu-ray releases (and infinitely better than the ancient snapcase DVD still laying around my house somewhere). The audio transfer is a little less impressive, though still pretty decent. I just think the upgrades to the sound are comparatively negligible. A digital copy and the original Blu-ray disc - along with its bonus features - are also included. However, there’s no new supplemental material.

Which means, of course, that the 4K edition of The Shawshank Redemption is strictly for those interested in a video upgrade or wish to add it to their digital library. But hey...the film is a classic, one of the few from the ‘90s that people will still be talking about 50 years from now. No respectable collection is really complete without it, and if it’s still missing from yours, why not the definitive version?

DOCUMENTARIES - “Hope Springs Eternal: A Look Back at The Shawshank Redemption” and “Shawshank: The Redeeming Feature.” Considerably longer and more substantial than typical featurettes, neither of these were created to be bonus material, but are certainly worth checking out.

“THE SHARKTANK REDEMPTION” - A so-so parody, featuring Morgan Freeman and his son (who’s also in the original film, by the way).

PHOTO GALLERIES - Presented in separate chapters, along with a ‘Play All’ option.

PURR-R-R...LIKE A GOOD SCRATCH BEHIND THE EARS
Posted by D.M. Anderson at 6:53 PM