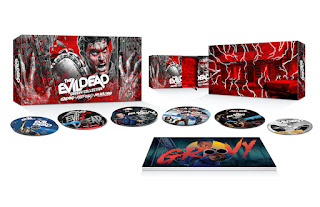 THE EVIL DEAD GROOVY COLLECTION on 4K Ultra HD + Blu-ray + Digital 11/16
Who knew evil can be so groovy? The original two Evil Dead films, as well as the three-season “Ash vs Evil Dead” series is coming home in The Evil Dead Groovy Collection, arriving November 16 on 4K Ultra HD + Blu-ray + Digital from Lionsgate. Horror fans, return to that iconic cabin in the woods, then travel decades beyond it, with this Evil Dead Groovy Collection. Wisecracking ladies’ man Ash Williams (Bruce Campbell) is reborn as a slayer of Deadites in The Evil Dead (4K + Blu-ray™) after a vacation in the country is ruined by the reading of an ancient demon-summoning text. In Evil Dead II (4K + Blu-ray™), a chainsaw-armed Ash is pushed to the brink of madness by unhinged evil yet again, while “Ash vs Evil Dead” (Blu-ray™) follows an older, grayer Ash over three wild seasons as he reckons with his bloody past in the face of a Deadite plague. Includes The Evil Dead Bonus Content DVD, with over three hours of features revisiting the film’s cast, crew, and undying legacy. 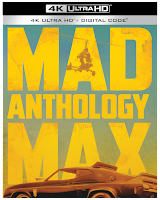 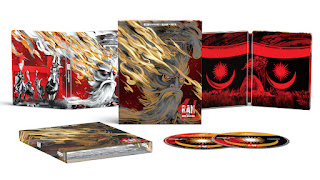 AKIRA KUROSAWA’S RAN on 4K Ultra HD Steelbook exclusively at Best Buy 11/16
From legendary director Akira Kurosawa (Rashomon, Seven Samurai) comes his sweeping action epic RAN. Ran arrives November 16th on 4K Ultra HD™ Steelbook from Lionsgate, exclusively at Best Buy. Akira Kurosawa’s RAN is a visually dazzling samurai epic that blends King Lear, 16th-century feudal Japan, and Kurosawa’s own notions of loyalty and honor to tell the story of aging Lord Hidetora, whose decision to bequeath his kingdom to his three sons sparks a power struggle that leads to chaos and madness. Hailed as a masterpiece by filmmakers and cinephiles alike, and winner of the 1985 Oscar® for Costume Design, Ran is a sumptuous 4K feast. Featuring all new artwork from artist Zi Xu, Ran will be available on 4K Ultra HD™ Steelbook at Best Buy for the suggested retail price of $27.99. 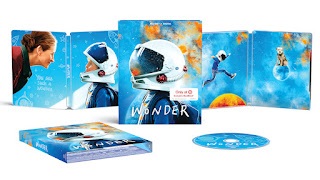 WONDER on Blu-ray Steelbook exclusively at Target 11/16
Starring Oscar® nominees Julia Roberts and Owen Wilson, comes the re-release of the life-affirming family drama WONDER. Wonder arrives November 16th on Blu-Ray Steelbook from Lionsgate, exclusively at Target. Based on the beloved best-selling novel, Wonder follows the inspiring story of the Pullman family, whose youngest child, Auggie, is a boy born with facial differences. When Auggie enters mainstream elementary school for the first time, his extraordinary journey unites his family, his school, and his community, and proves that you can’t blend in when you were born to stand out. Nominated for the 2017 Oscar® for Best Makeup & Hairstlying, and featuring all new artwork from artist Flore Maquin, this heartwarming and uplifting film will be available on Steelbook at Target.
Posted by D.M. Anderson at 1:47 PM