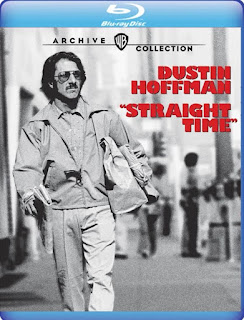 In the ‘70s, was there anybody more adept at playing twitchy, fallible, not-entirely-sympathetic protagonists than Dustin Hoffman? Imagine if he ever co-starred in a film with Bruce Dern. There wouldn’t be anything left of the scenery by the time they were done chewing it up.

That’s not to suggest Hoffman was guilty of overacting back then. Quite the opposite, actually. Most of the roles he chose greatly benefitted from his verbal and facial eccentricities. Though Hoffman still manages to disappear into his characters, they all share one unique connective thread, from Ratso Rizzo through Max Dembo: Nobody else could have played them.

Speaking of Max Dembo, Straight Time is one of Hoffman’s lesser-known films of the ‘70s, but arguably features one of his best performances. Released after a six year prison stint, Max is a headstrong, impulsive and ultimately self-righteous career criminal who can’t stay out of his own way. He briefly tries to go straight, even striking-up a relationship with Jenny (Theresa Russell), a naive young girl from an employment agency who manages to find him a legitimate job.

But after a violent conflict with his indifferent parole officer - who had him briefly jailed for something he didn’t actually do - Max quickly returns to his old ways, hooking-up with old partners to commit a series of increasingly large robberies. Though he’s the supposed brains of the outfit, Max is often reckless and stupid, taking unnecessary risks during the heists, much to the exasperation of his partner, Jerry (Harry Dean Stanton), who ends up bearing the brunt of the consequences for Max’s actions.

While Max isn't what anyone would consider sympathetic - or even likable - we are largely invested in him due to Hoffman, who’s completely convincing in the role. Despite being unfairly railroaded, Dembo’s an unrepentant lowlife who doesn’t think beyond his next few moves, seldom pausing to consider how he impacts the lives of those who might care about him.

Max’s descent into the life that first got him incarcerated is fascinating, even as we’re practically begging him not to assault his parole officer, not to rob that store, not to keep smashing-&-grabbing the jewelry cases long after their time runs out. Finally, we desperately wish for Max to cut Jenny loose before he drags her down with him. But like most real-life career criminals, he’s unable or unwilling to make any serious attempt at going straight. All we can do is hang on because it’s gonna be a bumpy ride.

Another underappreciated gem from the ‘70s, Straight Time is both an engaging character study and a gritty action film, with Hoffman’s authentic performance at the center. It may not always be a lot of fun - the audience is made to feel as tightly-wound as Max himself - but it’s consistently compelling and punctuated by a quietly haunting coda.

“STRAIGHT TIME: HE WROTE IT FOR CRIMINALS” - Vintage featurette.