NIGHT OF THE ANIMATED DEAD: A Familiar 'Toon 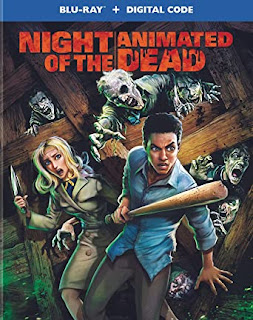 “Warner Bros. Home Entertainment provided me with a free copy of the DVD I reviewed in this Blog Post. The opinions I share are my own.”
NIGHT OF THE ANIMATED DEAD (Blu-ray Review)
2021 / 71 min

This isn’t actually the first animated remake of Night of the Living Dead. It was previously done - badly - a few years ago, with cut-rate CGI and motion capture. Though the setting was updated and the story rewritten, the whole thing was a pointless gimmick.

One might initially think the same thing about Night of the Animated Dead, which not only retains the late ‘60s setting, the story actually utilizes George A. Romero & John Russo’s screenplay. Even key scenes are designed to resemble the original’s camera angles. However, this one plays more like a respectful homage than an attempt to trade in on a brand name, providing a unique opportunity to revisit the same story in a completely different medium.

The end result is a film that may not be entirely necessary, but is sort of interesting nonetheless. And just as Romero’s grassroots budget contributed to the original’s effectiveness, this film’s clunky cut-rate animation might ultimately work in its favor. As previous inferior remakes have demonstrated, Night of the Living Dead’s nihilistic story and claustrophobic setting was never conducive to slick production or aesthetic spit & polish.

However, the song doesn’t remain completely the same. Remember the part in the original when Ben discusses his first encounter with zombies at a diner? This time we’re shown that incident depicted as a flashback sequence. The rest of the film isn’t quite a scene-for-scene remake, either. With a much shorter running time - just 70 minutes, including the end credits - director Jason Axinn must have decided recreating every single scene was narratively redundant. Considering some viewers will undoubtedly be thinking the same thing about the entire film, perhaps trimming things up was a wise decision.

The other major difference is the level of violence, which is predictably more gruesome. Axinn’s previous film, the even-more economically-animated To Your Last Death, was voyeuristically gory. Similarly, Night of the Animated Dead is a splatterfest of spraying blood, exploding heads and torn-bodies. Purists may balk, but the variety of creative ways Axinn chooses to violate human anatomy is sometimes amusing.

And if nothing else, the novelty of a classic retold as a cartoon definitely ups the curiosity factor. As such, Night of the Animated Dead might actually be of more interest to those who already know the Romero film by heart. Some might approve, others will indeed find it pointless. Either way, drawing such conclusions makes for interesting viewing.

FEATURETTE - “Making of: Animating the Dead”