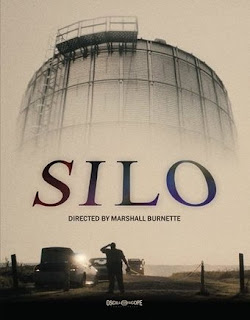 According to the end title card, this happens a lot...some poor bastard is working inside a silo and, like quicksand, the grain starts to suck them under. But even if one does manage to keep their head above the grain, the growing pressure pushing on their body makes it almost impossible to breathe. In either case, that sounds like a shitty way to die.

In Silo, moody teenager Cody (Jack DiFalco) gets stuck in the corn of a 50-foot silo while trying in vain to save one of his bosses from going under. Worse yet, he’s asthmatic, so he’s in immediate danger of suffocating. But most of the drama occurs outside of the silo. Local fireman Frank (Jeremy Holm) is first on the scene and seems to know how to handle the situation, but he’s also a drunk and not trusted by Cody’s mother, Valerie (Jill Paice), who blames him for her husband’s death a few years earlier.

Meanwhile, farm owner Junior (Jim Parrack) must contend with his ailing father (Chrix Ellis), who suffers from ALS and is responsible for opening the silo’s grain tube in the first place, thus trapping Cody. Interspersed among these concurring storylines are ongoing efforts to keep Cody alive while debating how to get him out of there. With the number of peripheral characters and subplots, Silo unfolds a lot like a disaster movie, albeit a very somber one.

The film benefits from a very short running time. Despite some interesting scenes depicting how rescues like this are performed -  and a lot of intermittent philosophizing about farm life - there really ain’t a hell of a lot of story here. Even the drama outside of the silo feels manufactured to pad It out, especially since the primary conflict between Frank and Valerie is never explored in much depth.

But while throwing-in a twister and a couple o’ flying cows would’ve livened things up, Silo is aided by good overall performances and an emphasis on realism. Perhaps too much realism, at times, but ultimately, we do care if Cody gets rescued - mostly for Mom’s sake - and despite never being certain why he’s such a local pariah, we’re invested in Frank’s shot at redemption.

“SILO: EDGE OF THE REAL WORLD” - Short doc focusing on a few young farmers and how this happens in real life.

2 PANEL DISCUSSIONS - One with the filmmakers, the other with fire rescue members.

“BUILDING THE SILO” - Short making of featurette that focuses on the construction of the silo used in the film.