BREAKDOWN: Kurt Russell on the Highway to Hell 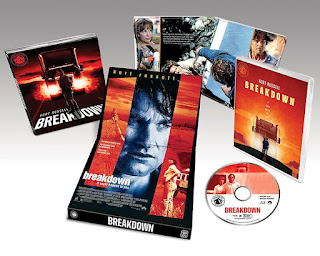 Kurt Russell has always been a reliable, engaging actor (and something of a cult hero in certain circles). But he’s seldom ever given props for his versatility. Beyond his early years as a Disney star, Russell has convincingly played tough guys, comic foils, romantic leads, cops, crooks, psychos, goofballs and - despite his distinctive features - larger-than-life historical figures.

One film on Russell's resume that often gets criminally overlooked - and features one of his best performances - is 1997’s Breakdown, where he plays mild-mannered everyman Jeff Taylor, on route to California with wife Amy (Kathleen Quinlan) when their Jeep breaks down in the middle of nowhere. Trucker Red Barr (J.T. Walsh) offers a ride to a nearby diner to use the phone; Amy accepts, while Jeff decides to stay with the car. But when he gets it started himself and reaches the diner, she’s nowhere to be found, nor does anyone recall her showing up..

It turns out Red isn’t the Good Samaritan he first seemed to be. Aided by a few other nasty associates, Red has taken Amy and threatens to kill her if Jeff doesn’t walk to the next town, empty out their bank account and deliver the cash to him. Since Red assures him he’ll be watched the entire time, Jeff can’t go to the police, call for help or tell anyone in town what’s happening to him. And the story’s just getting started.

A smart, tightly-wound thriller in the vein of other “road terror” films like Duel and Joy Ride, Breakdown succinctly introduces the conflict and all the major players before ramping-up the tension, which seldom wanes throughout the rest of the film. With the exception of a climax that stretches credibility, writer-director Jonathan Mostow delivers a plausible, fast-paced story with more than a few surprises.

But despite several suspenseful, well-executed action sequences, what really makes the film crackle are the performances and characters. Russell convincingly portrays Jeff as fallible, terrified and desperate. Though never stoic, he’s not completely helpless, either. Forced to take matters into his own hands, Jeff turns out to be quite clever and resilient when backed into a corner. As for the late, great J.T. Walsh...Red is arguably the most wonderfully hateful character he’s ever played.

Breakdown is a great choice for inclusion in the Paramount Presents series...and somewhat surprising, too. Though the film was a critical & box office success, it’s been sort-of forgotten over the years, never getting a proper Blu-ray release until now. But while its cultural impact pales in comparison to some of Paramount’s bonafide blockbusters from the ‘90s, Breakdown is arguably one of the better action-thrillers of the decade and certainly worth rediscovering.

“VICTORY IS HERS” - A new interview with actor Kathleen Quinlan.

ALTERNATE OPENING - Introduced by director Jonathan Mostow, the opening provides background of the Taylors’ decision to move to California. It’s interesting, but completely unnecessary to the story.