Beneath the Surface of THE BROTHERHOOD OF SATAN 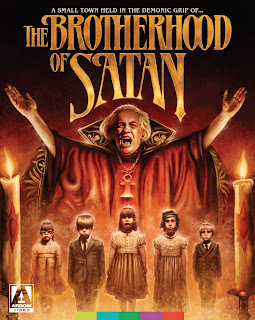 On the surface, The Brotherhood of Satan is just another budget-conscious slab of satanism that reeks of the decade from which it sprang, one of many cranked-out in the wake of Rosemary’s Baby. And if you approach it with that attitude, it could be all you see. However, those with historical curiosity and an open mind might find themselves impressed by what actor-producer-uncredited writer L.Q. Jones and journeyman director Bernard McEveety were able to pull-off with such limited resources.

Ben, his girlfriend, Nicki, and daughter K.T. end up stranded in Hillsboro, a small southwestern town. It’s soon revealed that the townspeople themselves are not-only trapped as well, a few dozen have been murdered and their children have gone missing. A few of the deaths are depicted pretty graphically for a PG-rated film, with hapless victims offed in a variety of nasty ways...a doll, a tank (!) and a hooded, sword-wielding horseman, most of them life-sized facsimiles of innocuous toys.

It turns out the missing children are under the spell of elderly Satanists headed by the kindly town doctor (Strother Martin), which the audience learns of long before Ben, the sheriff and the local priest catch on. However, it’s the cult’s purpose for these kids that provides the real horror, revealed in the unnerving final act. Until then, the film is strangely compelling, with some surprisingly atmospheric cinematography, several sequences of genuine tension and creative death scenes. These elements help offset the goofier aspects, such as several oddball scenes that seem to go on forever, yet nothing actually happens (like Ben driving his family down the highway in complete silence...for several minutes!).

But despite the weirder moments - perhaps partially because of them - The Brotherhood of Satan achieves a dark, surreal tone not-unlike Rosemary’s Baby and includes a similarly ominous denouement. It never approaches the mastery of Polasnki’s film, but is certainly a notch or two above the usual dime store satanism that permeated drive-ins back in the ‘70s.

“SATANIC PANIC: HOW THE 1970s CONJURED THE BROTHERHOOD OF SATAN” - A pretty interesting 15 minute video essay by David Flint.

“THE CHILDREN OF SATAN” - Interviews with two of the peripheral child characters, all grown up, of course.

REVERSIBLE COVER - With new and original artwork (we kinda like the new art!).