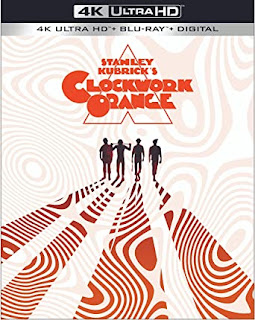 My wife and I provide a pretty accurate microcosm for the legacy of A Clockwork Orange, easily one of the most controversial, polarizing films ever made.

Shortly after we got married, I had a few buddies over to tip-back a few beers - actually a lot o’ beers - and watch movies. Thinking it would be a good choice for a guys’ night in, I rented A Clockwork Orange, which I’d seen a few times but none of them had. Sure enough, we all had a great time getting our buzz on while Alex (Malcom McDowell) and his Droogies gleefully engaged in a bit of the old “ultra-violence.”

Francie, on the other hand, was disgusted...and likely concerned her new husband would find scenes of rape, assault & murder even remotely humorous. She left the room after about 30 minutes, later declaring the film misogynistic, sadistic and pornographic. Not only did Francie hate it, she seemed a little pissed that I didn’t. Unfortunately, I was never able to convey that it wasn’t the sexual violence itself that I found amusing, but the absurdity of how it’s presented...nearly light-hearted in tone and accompanied by upbeat, benign classical music.

Nor could I convince her that A Clockwork Orange is ultimately a morality tale...almost literally. More specifically, the film charges that avoiding evil acts for fear of personal consequences doesn’t make someone righteous. Alex’s “cure” doesn’t change who he is - an unrepentant sociopath - it just takes away his freedom to make his own moral choices.

Francie’s assessment isn’t wrong, though. A Clockwork Orange does indeed objectify women and glorifies the violence against them, especially during the first act. Stylized as they may be, these scenes are extraordinarily brutal, partially because of their overall indifference to the victims’ suffering, but mainly due to the perceived conceit that audiences will find them exhilarating. And not only does the film serve-up a protagonist who’s irredeemably cruel, narcissistic and apathetic, he’s presented as someone we’re expected to root for.

But I’m not wrong, either. We don’t so much side with Alex as we do against the world in which he exists, managed by a system of government which ultimately believes it can “fix” immorality through conditioning, which is very much how many organized religions operate. After all, how many people out there suppress their darkest impulses more out of fear of retribution than an inherent desire to be a good person? Ultimately, Alex is just a vessel to personify the fallacy of imposed morality. Viewed in that context, the film is as relevant today as it was 50 years ago.

Such is the legacy of A Clockwork Orange (at least in my house), and part of the reason the film will never be completely dismissed or forgotten, regardless of one’s opinion.

Now it’s available in 4K, and of course, Francie more-or-less assured me this was one title I’d be reviewing alone. No surprises there. Nor was I surprised that the overall image is an improvement over the previous Blu-ray release, particularly noticeable in scenes where color and oppressive cityscapes reflect the dehumanization theme prevalent in most of Kubrick’s work since Dr. Strangelove. A Clockwork Orange might be - by design - his most emotionally aloof film, exacerbated by a cold aesthetic that’s nicely restored with this 4K transfer. The overall audio quality is okay, though not a significant improvement; the music sounds a lot better than the dialogue.

Finally, like many of Warner Bros recent 4K editions, this set includes a Blu-ray and digital copy, but no new bonus features. However, there’s a generous amount of vintage material - mostly related to the film’s tumultuous history - that pretty much any cinephile will find interesting, even if they share Francie’s assessment.

“STILL TICKIN’: THE RETURN OF A CLOCKWORK ORANGE” - From 2000, this is an excellent 45-minute retrospective documentary featuring interviews with numerous prominent directors, critics and Malcom McDowell.

“GREAT BOLSHY YARBLOCKOS! MAKING A CLOCKWORK ORANGE” - Another interesting retrospective doc, which also goes into detail about the original novel by Anthony Burgess.

“MALCOLM McDOWELL LOOKS BACK” - The actor shares thoughts and anecdotes about the film.

PURR-R-R...LIKE A GOOD SCRATCH BEHIND THE EARS
Posted by D.M. Anderson at 4:38 PM