THE POWER Spreads Its Title Around 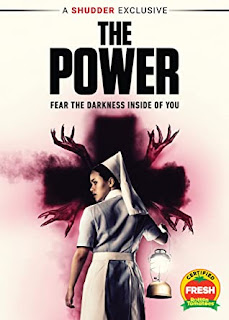 The title could actually apply to three aspects of this film.

First, it takes place in an English hospital during a miners’ strike in 1974. At the time of that strike - which actually happened - nightly blackouts were enforced to conserve power. The film’s protagonist, Valerie (Rose Williams), is a meek, neophyte nurse forced to work the night shift while most of the power is shut down. She also happens to be very afraid of the dark, for reasons that are eventually revealed at a key moment.

Second, there’s some kind of malevolent spirit lurking the halls which appears hellbent on terrorizing Valerie, though none of her colleagues working the same shift believe her, including a particularly bitchy ex-schoolmate, Babs (Emma Rigby).  Even after this entity possess her, they initially assume she’s making it all up, since they’re aware she once lied about being assaulted while attending a religious school. In fact, when people start turning up dead - including Babs and a lecherous maintenance man - the other nurses a certain Valerie’s killing them herself.

The third aspect from which The Power derives its title has to do with plot turns that reveal themselves much later. To discuss them in any detail would be creeping into spoiler territory (though I think most savvy horror fans will have it figured out long before then). However, morally-appalling abuse of power and authority is definitely one of the film’s central themes.

Until that final act, The Power feels stuck in second gear. Character exposition comprises most of the first act, but while Valerie certainly earns our sympathy, most others are painted in broad strokes and the vengeful spirit turns out to be something we’ve seen many times before. The film is deliberately paced and atmospheric, but relies too heavily on gratuitous jump-scares for its own good, to the point where we wish it would stop throwing us false alarms and get on with the story.

When it finally does, however, things liven-up considerably, even if much of it rings familiar. The revelations during the climax are somewhat predictable, but the story comes to a pretty satisfying conclusion. Well directed and featuring a solid lead performance by Williams, The Power is ultimately worth checking out, though a bit of patience is required.