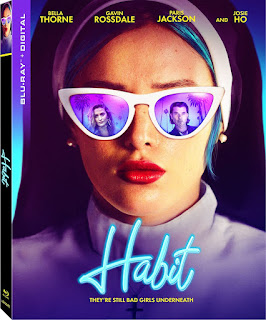 Habit isn’t simply a bad movie. It’s clueless, like that nerdy guy who desperately wants to fit in with the “cool” kids but has no idea how.

Making a film with cult appeal is harder than a lot of people think. It ain’t just quirky characters, outrageous behavior, self-awareness and scenes created for shock value. Its appeal to the fringe crowd should appear effortless, a film the director probably would have made regardless of its potential audience.

But even then, the basics of moviemaking still apply...the characters, story and execution need to be engaging, even if only for a niche crowd.

However, they don’t try all that hard to stay hidden, nor do they appear very concerned for their own safety. It’s obvious the whole nun aspect of the plot is an excuse to show...well, sexy nuns with guns. However, there’s nothing sexy, likable or even interesting about these three. Every aspect of these characters - their dialogue, nastiness and overall nihilism - reeks of superficial attempts at edginess.

Speaking of which, Habit apparently raised the hackles of a few Christian groups due to elements they perceived as blasphemous, such as depicting Jesus as a lesbian and Mads speaking directly to Jesus while having sex with a hunky priest. But ultimately, they’re just simple-minded attempts to shock. There’s no message or commentary behind them. Those religious groups would’ve been better off getting their panties in a bunch over a movie that actually had something to say about Christianity. All they managed to do here was briefly give an inconsequential movie more attention than it deserves.

Habit is a film with obvious cult aspirations, but ultimately so desperate and tone-deaf that some viewers might experience a little second-hand embarrassment for everyone involved. After all, doesn’t a small part of us feel sort-of bad for that nerd who doesn’t realize the so-called “cool” kids are laughing at him, not with him?

BLEH! LIKE COUGHING UP A HAIRBALL.
Posted by D.M. Anderson at 9:06 PM