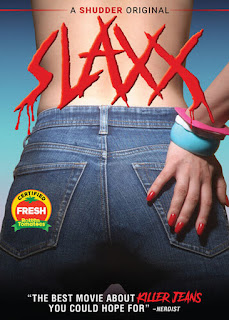 Yes, Slaxx is yet another horror-comedy centered around a willfully ridiculous premise. Fortunately though, it isn’t a one-joke movie coasting entirely on its title and concept.

As you could probably deduce from the title, Slaxx is about killer pants. More specifically, a pair of designer jeans that comes to life and begins offing the employees of Canadian Clothing Clothiers, an ultra-trendy retail store. We’ve all visited places like this...colorful, blindingly bright stores filled with immaculately folded, overpriced clothing and manned by perpetually-grinning young adults armed with headsets. Half of the film is a clever parody of companies like Old Navy, the type of people who work there and the phony teamwork atmosphere instilled by managers who act more like cheerleaders.

The main protagonist, Libby (Romane Denis), is a new employee assisting the team after-hours, getting the store ready to sell a new brand of jeans called Super Shapers. But these are no ordinary pants. Super Shapers were made from an “experimental” cotton picked by slave labor in India, where one of the young pickers was killed by getting sucked into a cotton thresher. Possessed by her vengeful spirit, the pants start slaughtering people in a variety of creatively gory ways. Since the store is in lockdown, no one can escape, while ambitious, conniving manager Craig (Brett Donahue) refuses to call the police for fear it'll affect his promotion chances.

While not always laugh-out-loud funny, much of this is pretty amusing. More importantly, the humor isn’t always centered around the inherent silliness of murderous pants, which is a good thing since the novelty wears off pretty quickly (as it does with most one-joke horror-comedies). The narrative is bolstered by a sharp, satirical depiction of influencers, corporate greed and ruthless ambition, mostly personified by Craig, who’s easily the funniest character (wonderfully played by Donahue).

FEATURETTES - “The Story Behind Slaxx”; “The Pants Are Alive”; “Producing a Killer Pants Movie”; “Call in the Death Consultant”; “Casting Slaxx”