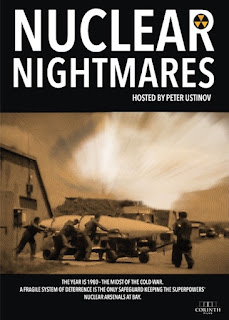 This documentary hails from a time when the prospect of nuclear war cast an ominous shadow. Not that it isn’t possible today, but back then, many experts - some of whom are interviewed here - believed it was inevitable. Certainly our decades-old stand-off with the dreaded Soviet Union was bound to come to a head, either accidentally or from skirmishes that escalate beyond anyone’s control.

It never happened, of course. For the most part, the Russians’ role as global villains has since been surpassed by more malevolent (and unstable) threats throughout the world.  So today, Nuclear Nightmares is more of a period piece, a speculative look at the potential end result of Cold War paranoia.

Narrated by Peter Ustinov, the film presents several real-world scenarios which could ultimately lead to nuclear brinkmanship, using current-at-the-time tensions between various nations (but mostly the U.S. and the Soviet Union). After each segment, Ustinov assumes the role of a military officer in a bomb shelter, explaining the apocalypse as though it already happened and what led to it.

Viewed in the context of the time it was made, the film can be quite chilling at times. It presents the subject matter in a detached, objective manner - as do its numerous participants - giving the segments a sense of quiet urgency that wouldn’t be as effective with the usual apocalyptic histrionics. However, when Ustinov isn’t on the screen to serve-up some dramatic heft, the film is often pretty dry. Perhaps just a smidgen of doomsaying jazz-hands would boost our engagement level, especially since nuclear war isn’t really something we wake up worrying about anymore.
Still, watching Nuclear Nightmares today is sort-of like unearthing a time capsule. It’s interesting to see what various experts and strategists once thought awaited humankind. But while we can take comfort in the fact their predictions never came to bear, we shouldn’t dismiss them entirely. Considering there are still a lot of nukes lying dormant in silos & submarines around the world - not all of them in reliable hands - perhaps these guys just got the timeline wrong.