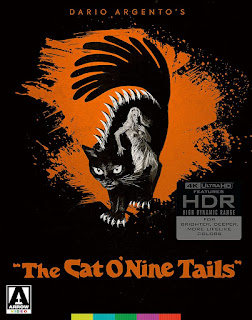 Dario Argento’s second film, The Cat O’ Nine Tails, doesn’t rank among his greatest, but it’s an important career stepping stone. Like The Bird with the Crystal Plumage, the story is pure giallo, perhaps more visually dynamic than similar films being made by his mentors and peers at the time.

But while still primarily a mystery, there’s more of the stylistic violence that would soon become Argento’s trademark, bridging the gap between Plumage and the full-blooded horror of Deep Red. So while the story is mostly a crime thriller - sometimes a meandering one - the vivid murder set-pieces are indicative the director’s ongoing efforts to redefine the genre. With hindsight, it’s obvious he wasn’t planning to pump out giallo for the rest of his career.

James Franciscus plays Carlo Giordani, an ambitious reporter who teams up with blind, retired journalist Franco Arno (Karl Malden) to investigate the murder of a genetic rearcher, Dr. Calabresi, which they believe is related to a recent break-in of the institute he worked for. Though nothing was apparently stolen, some suspect industrial espionage (and one institute bigwig warns Carlo of the dangers of investigating any further). One thing is certain...Calabresi was planning to blackmail somebody with evidence related to the institute's research, which involved studying XYY Syndrome. Apparently, those who have this chromosome are predisposed to violent behavior.

But like much of Argento’s work of the time, the nuts and bolts of the plot are of secondary importance. So are the performances, for that matter. Franciscus and Malden are serviceable in their roles, while sexy Catherine Spaak provides some eye candy (and maybe a false lead). However, these characters mostly exist to provide exposition. At no time does Franco’s blindness figure into the plot, nor does the inevitable moment when Carlo and Anna (Spaak) hook-up for a roll in the hay (one of the clumsiest love scenes I’ve ever watched). While Argento has always valued style over substance, here he actually seems bored with his own script.

However, the visually striking murder sequences make the plot worth enduring. As the killer targets anyone who might have knowledge of Calabresi’s evidence, we genuinely fear for them, mostly because we’re certain their deaths will be brutal and agonizing. Argento has a unique knack for not-only creating tension leading up to their murders, his visual style renders them both brilliantly cinematic and tough to watch. Not to sound overly morbid, but few directors capture the moment of onscreen death quite as unnervingly as Argento, even when such scenes aren’t always particularly graphic. Here, he’s aided significantly by Ennio Morricone’s propulsive score, which sounds like it might have inspired the music Goblin would later create for the director’s best horror films.

The Cat o’ Nine Tails was released on Blu-ray just a few years ago with a nice batch of bonus material, which are all carried over to his set. The main reasons to consider upgrading would be the new 4K restoration (which looks terrific), the packaging and all the tactile goodies inside. Like most of the other Arrow Video’s other Limited Edition sets, there’s lobby cards, a poster and a meaty book with plenty of interesting insights on the film, all packaged in an attractive box with new artwork. If aesthetics are your thing, dig in. If not, Arrow's 2018 Blu-ray is a more budget-friendly option.

ORIGINAL ENDING - Not actually shot, the ending is presented as pages from the screenplay, with video accompaniment.

PURR-R-R...LIKE A GOOD SCRATCH BEHIND THE EARS
(but only if aesthetics matter)
Posted by D.M. Anderson at 5:11 PM