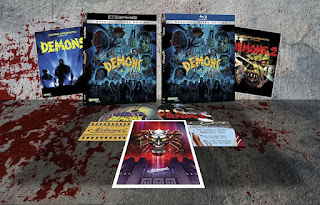 DEMONS and DEMONS 2 on 4K UHD from Synapse Films 10/19
Regarded by horror fans the world over as two of the greatest Italian horror films ever made, Lamberto Bava’s Demons films are not only major cinematic nightmare fuel, but also hugely entertaining splatterfests of the highest order. Synapse’s 2013 Blu-rays remain two of their most popular releases, and now they’re bringing these favorites to 4K UHD and remastered Blu-ray in brand-new spectacular 4K restorations! These horrific splatter classics produced by Dario Argento (Suspiria) have never looked or sounded better and are packed with hours of special features, making this the ultimate home video release of these horror favorites.

In Demons, a masked man offers tickets to a horror movie sneak preview at the mysterious Metropol cinema. When a patron is scratched by a prop displayed in the theatre lobby, she transforms into a flesh-ripping demon! One by one, the audience members mutate into horrible creatures hell-bent on destroying the world! Can anyone escape this gory orgy of terror? In 1986’s ambitious sequel Demons 2, the apocalyptic terror continues! A televised horror film spells doom for the residents of a luxury high-rise apartment, as demons are unleashed through the TV screen at a young girl’s birthday party. As more and more residents are infected and transformed into blood-thirsty demons, a young couple fights to survive as they try to escape Hell on Earth. 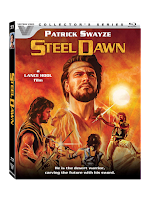 STEEL DAWN is available for the first time on limited-edition Blu-ray (plus Digital) 10/26
The acclaimed Vestron Video Collector’s Series delivers a gripping dystopian punch when the suspenseful and action-packed Steel Dawn — available for the first time on limited-edition Blu-ray (plus Digital) — arrives on October 26 from Lionsgate. Golden Globe® nominee Patrick Swayze (1996, Best Actor in a Motion Picture — Comedy or Musical, To Wong Foo, Thanks for Everything! Julie Newmar) stars as a new breed of warrior in a post-nuclear era where laws are useless and water is more precious than blood. "Whoever controls the water controls the valley," proclaims the evil Damnil in this cult favorite starring Patrick Swayze as Nomad, an ex-soldier roaming the desert wastes of a war-ravaged world. When his mentor is killed before he can take the job of peacemaker in the town of Meridian, Nomad lends the townspeople his fighting skills instead, gaining the trust of war widow Kasha and her son, Jux. But after Damnil learns of a secret water supply flowing under Kasha’s farm, his thirst turns truly murderous in this dystopian ’80s gem featuring Anthony Zerbe and Brion James. 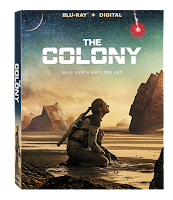 THE COLONY arrives on Blu-ray (plus Digital) and DVD 10/12
Executive produced by Roland Emmerich (Midway), the new visually stunning sci-fi thriller film The Colony arrives on Blu-ray (plus Digital) and DVD October 12 from Lionsgate. The Colony stars Nora Arnezeder (TV’s “Origin,” “Mozart in the Jungle,” Safe House), Iain Glen (TV’s “Titans,” “Game of Thrones,” Lara Croft: Tomb Raider), Sarah-Sofie Boussnina (Department Q: The Absent One, TV’s “Knightfall,” “The Bridge”), and Sope Dirisu (TV’s “Gangs of London,” “Humans,” The Huntsman: Winter’s War). In this riveting sci-fi thriller from executive producer Roland Emmerich, Earth has been decimated by climate change, pandemics, and war. Years after the ruling elite escaped to another planet, a mission was launched to find out if a return to an uninhabitable Earth were possible. That mission was lost. Now, a lone astronaut in search of answers struggles to survive the hostile planet, and she must ultimately make a choice that will seal the fate of the wasteland's remaining populace. 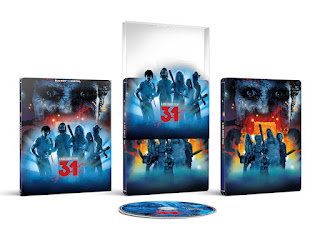 31 arrives on Blu-ray + Digital Steelbook from Lionsgate, exclusively at Target 10/26
From beloved cult director Rob Zombie comes the new re-release of his spine-tingling carnival of horrors, 31, arriving October 26 on Blu-ray + Digital Steelbook from Lionsgate, exclusively at Target. Written, directed, and produced by Zombie, 31 is a fiendish Halloween horror-gore romp set in 1976, in which five happy-go-lucky carnies on a cross-country road trip are kidnapped and hunted by murderous clowns in an escape room-style hideaway in the middle of nowhere. With an ensemble cast that includes Sheri Moon Zombie, Jeff Daniel Phillips, Lawrence Hilton-Jacobs, Richard Brake, Jane Carr, and Malcolm McDowell, 31 is tailor-made for diehard horror fans and Rob Zombie acolytes. Featuring brand-new reconceived artwork from award-winning graphic artist Vance Kelly, 31 will be available on Blu-ray + Digital Steelbook at Target.
Posted by D.M. Anderson at 4:16 PM