TRUTH TO POWER is More Than a Metal Doc 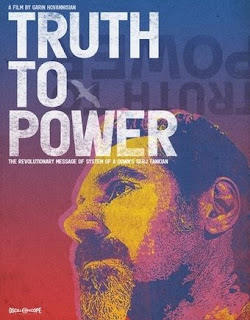 For those unfamiliar with the name, Serj Tankian is the founder & and leader of System of a Down, one of the biggest - and quirkiest -  heavy metal bands of the early 2000s. Though he grew up in LA, Tenkian is actually Armenian, as are his bandmates. Not only that, he’s an outspoken activist who frequently speaks out against social injustice and the corrupt government in his native country...and not just through his music.

Truth to Power is an interesting documentary that serves two purposes. First, it’s a biography chronicling Serj’s life and career - both with the band and as a solo artist. Second, we see his ongoing efforts to not-only advocate free, legitimate elections in Armenia, but for the world to officially recognize the Armenian genocide of World War I. One major takeaway is that Tankian’s career and activism are inseparable (sometimes to the consternation of the rest of the band). That he’s been willing to put System of a Down on-hold for years speaks volumes about his integrity.

Not that he ever stopped making music, but his solo work is even more experimental and provocative than SOAD’s politically-charged records. The film encompasses a couple of decades of music, concert footage, controversy and activism, culminating with two affecting segments: SOAD’s first concert in their native Armenia, followed by the snowballing protest against the country’s most recent election, which was partially inspired by Tankian using his influence to call others into action.

These two events give Truth to Power an emotional, heartwarming kick you don't often see in a documentary about a heavy metal artist. It also means the viewer doesn’t necessarily need to be a fan of the genre or Tankian’s music - which is an acquired taste - to appreciate his undeniable dedication to his craft and causes (which, to him, appear to be one and the same).

PURR-R-R...LIKE A GOOD SCRATCH BEHIND THE EARS
Posted by D.M. Anderson at 5:19 PM