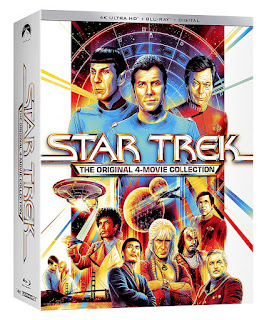 Star Trek in 4K was inevitable, of course. And predictably, the films included in this set have never looked better on home video. Right after popping-in the very first disc, it’s immediately obvious Paramount has put the same effort into this one as they did with the recent Indiana Jones 4-Movie Collection.

But a few things perplex me. First, why just the first four movies? There are six films featuring the cast from the original series, and while I’m sure everyone besides William Shatner is content to forget Star Trek V, it’s a shame they aren’t all included because Star Trek VI: The Undiscovered Country is one of the franchise’s underappreciated gems.

Second, the set features the original theatrical cut of Star Trek: The Motion Picture, arguably the second-most maligned entry in the series. Why not include the vastly superior 2001 Director’s Cut overseen by director Robert Wise? That version not-only featured newly-created special effects to remedy the rush-job done back in 1979, his editorial changes and audio flourishes made it a much better film. Even so, of all the films in this set, The Motion Picture benefits most from the 4K treatment, the most striking example being the still-awesome sequence where the Enterprise travels through the V’Ger cloud. Disc one also includes the lone new bonus feature of the entire set, an Isolated Score option showcasing Jerry Goldsmith’s incredible music.

The set features both the Director’s Cut and theatrical version of Star Trek II: The Wrath of Khan (another reason I’m vexed over why they didn’t do the same for The Motion Picture). While I agree this film is probably the high-point of the entire franchise, I’m in the minority opinion regarding the Director’s Cut. The four minutes of restored scenes are interesting, but do nothing to improve the film. And for the sake of journalistic integrity, I must confess taking a shortcut for this review: Having seen Wrath of Khan so many times over the years - in theaters and every video format - I only checked out how certain key sequences look in 4K.

I always thought Star Trek III: The Search for Spock was one of the more underrated films in the franchise. Granted, it ain’t as rousing or action-packed as the previous film, but that was obviously a deliberate move, since the overall theme of friendship dictates that the story would be more subdued and humanistic. For the first time in the series, Admiral Kirk comes across as a fallible, vulnerable human being rather than a stoic, fearless superhero. And considering Shatner’s reputation for overacting, he gives a remarkably low-key performance (which he’d also carry into the next film). This film also looks amazing in 4K, particularly the sequences set on the disintegrating Genesis Planet, as well as the first appearance of the Klingon Bird-of-Prey. I always knew the ship was green, but I’d forgotten how green.

Finally, there’s Star Trek IV: The Voyage Home, the conclusion of a three-film story arc that began with Wrath of Khan. Though affectionately known today as “the one with the whales,” the film’s comedic tone and environmental message were not-only a big surprise back in ‘86, its appeal extended beyond the Trekkie crowd, even if some newbies weren’t quite up-to-speed on the story. Though the characters and humor are still charming and its themes more relevant than ever, The Voyage Home looks more like a product of its decade than any other film in the franchise, but that’s obviously due to its present-day setting. Catherine Hicks is still annoying, though.

The set also comes with digital copies and Blu-ray discs of each film, where all of the bonus features are located. While there’s a ton of ‘em, be advised that none of the extras are new, all carried over from previous Blu-ray releases. Additionally, those who already have the films on DVD should still hang onto them, since some of those discs’ supplemental material are not included here. But all four films look outstanding in 4K, and if the best possible picture is paramount to you (no pun intended), this nicely packaged boxed set is definitely worth the upgrade. Only the omission of the last two movies keeps it from being definitive.

“LIBRARY COMPUTER” MODE (all movies) - This was my favorite featurette from the previous releases, which allows the viewer to access various text info while watching the film.

AUDIO COMMENTARIES (all movies) - ST: TMP has one, all the others feature two.

TEXT COMMENTARY (Director’s cut only) - This is another great goody from previous releases, sort-of a “Pop-Up Video” features with trivia related to the film and the Trekverse.

“THE GENESIS EFFECT: ENGINEERING THE WRATH OF KHAN”

“PRODUCTION” FEATURETTES - “future’s Past: A Look Back”; “On Location”; Dailies Deconstruction”; “Below the Line: Sound Design”; “Pavel Chekov’s Screen Moments” (Walter Koenig still sounds resentful over his minor role in the franchise)

“THE STAR TREK UNIVERSE” FEATURETTES - “Time Travel: The Art of the Possible”; “The Language of Whales”; “A Vulcan Primer”; “Kirk’s Women”; “Star Trek: The Three-Picture Saga”; “Star Trek for a Cause”; “Starfleet Academy SCISEC Brief 002: The Whale Probe”