Get Onboard JUNGLE CRUISE 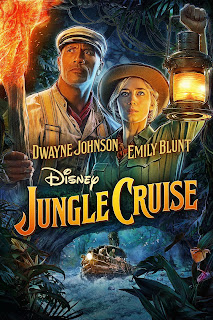 For this writer, getting on board for Jungle Cruise was kind of a no-brainer.

First, who doesn't like Dwayne Johnson? He’ll likely never win an Oscar and nobody will ever suggest he possesses a ton of range, but he’s got loads of charisma and has an uncanny knack for choosing projects uniquely suited to his abilities. His filmography may not be loaded with classics, but unless you’re a cinema snob, there ain’t too many pure pooches, either.

Second, Emily Blunt is engaging in nearly every role she plays, from high-minded art films to high-concept blockbusters. Additionally, she's pretty versatile, adept in just about any genre. I also happen to think she’s adorable.

But perhaps most significantly, Disney has always taken great care of its own intellectual properties, even if - in an effort to appeal to the widest swath possible - the results are sometimes staggeringly predictable. There’s nary a beat in Jungle Cruise that we don’t see coming, which is ultimately a major part of its appeal. Big stars in a family-friendly action movie based on one of Disneyland’s oldest, most endearing rides? Hey, it worked fabulously for the original Pirates of the Caribbean. There’s no reason the same formula wouldn’t work again.

And it does work. Better yet, it delivers exactly what it promises. Some might remember the overall skepticism surrounding Pirates, only to be stunned by how great it was. The film didn’t cynically cash in on a brand name. Instead, our familiarity with the ride was simply a springboard for a witty, imaginative epic. Jungle Cruise charts the similar course, with charming allusions to the original attraction - mostly during the first act - while steering its way through a funny, action-filled story with fantasy elements (not unlike an Indiana Jones adventure). Furthermore, as opportunistic boat skipper Frank Wolff and adventurous botanist Lily Houghton, Johnson & Blunt make congenial foils with undeniable chemistry.

Who cares if we know what waits ‘round every bend in the river?

So yeah, I was totally on board for a voyage of cinematic comfort food. I do have one minor quip, though. Predictably, Jungle Cruise features plenty of action, mostly bolstered by impressive special effects. But one glaring exception is Proxima, Frank Wolf's pet leopard, which is atrociously animated. C’mon, this is the same studio that created photo-real critters for The Lion King...they couldn’t go that extra mile here? Still, that kitty’s kind of charming anyway.

Interestingly enough, while doing a bit of research for this review, I noticed the film was directed by Jaune Collet-Serra. Not exactly a household name, but with a pretty impressive resume, including The Shallows, Orphan and a slew of Liam Neeson action flicks. None of ‘em are classics, but the man knows his way around high-concept storytelling. With hindsight, I guess I shouldn’t have been surprised that Jungle Cruise turned out as good as it did. Here’s hoping he, Johnson & Blunt all sign-up for the sequel (which has already been announced), and that they deliver more of the same.

I’d be on board for that.