THE GATEWAY and the Kick-Ass Social Worker 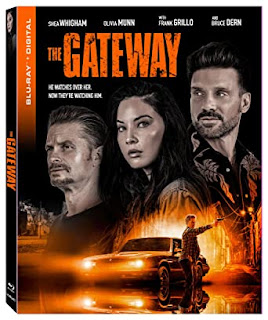 Though he doesn’t look or act the part, Parker (Shea Whigham) is a social worker. He smokes, drinks, does drugs and appears perpetually hungover. But we never doubt his dedication to his job. Perhaps because he grew up in the Foster Care system after being abandoned by his own father (Bruce Dern), Parker has a lot of empathy for the neglected or at-risk children in his caseload.

One such case is the crux of the narrative in The Gateway. Parker is particularly invested in Ashley (Taegen Burns), who has trouble getting to school on time every day because her mother, Dahlia (Olivia Munn), works nights as a blackjack dealer. When Dahlia’s abusive, criminal husband, Mike (Zach Avery), is released from prison and returns home, Parker is concerned for their safety.

Sure enough, Mike immediately goes back to his old ways, doing a job for local druglord Duke (Frank Grillo) that involves shooting up a rival’s business front and making off with a cache of heroin. Though he’s being watched by the police, Mike’s increasingly reckless behavior endangers his family, of whom he’s violently possessive. Meanwhile, even after losing his job for punching a coworker, Parker is determined to protect them, at the risk of his own life.

Though touted primarily as an action film, The Gateway gets off to a slower start than fans of the genre might like, mainly to establish Parker’s character as someone who appears morally questionable and carries quite a bit of emotional baggage due to his own tumultuous childhood. These details are not only important to earn the viewer’s empathy, they give the violent showdown during the final act a lot more dramatic weight.

Parker is an engaging character and Whigham turns in an effective, low-key performance, conveying quiet desperation appropriate for the role. And even though he can play cantankerous old curmudgeons in his sleep, Dern is once again enjoyably eccentric. Conversely, Mike is strictly a one-note villain, wildly overplayed by Avery. And though prominently billed, Grillo only appears in a few scenes, all of them seated at a bar. But despite a few lazily written characters, The Getaway tells an interesting story. It takes a while to get going, but by the time bullets and punches start flying, we’re emotionally invested in how everything’s going to turn out.

FEATURETTE - “Living Legends: The Cast of The Gateway”

PURR-R-R...LIKE A GOOD SCRATCH BEHIND THE EARS
Posted by D.M. Anderson at 8:10 PM