CHERNOBYL 1986: A Taste of Vanilla 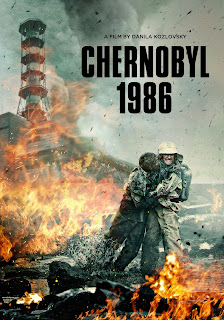 Comparisons between Chernobyl 1986 (aka Chernobyl: Abyss) and HBO’s landmark miniseries are inevitable. However, that’s like weighing a loaded hot fudge sundae against a vanilla cone.

Those who saw Chernobyl - the definitive depiction of the disaster and its aftermath - might recall the episode where several rescue workers volunteer for what’s essentially a suicide mission: To venture below the nuclear plant’s reactor and open the water valves before the exposed core hits it, which would render most of Russia radioactive.

Chernobyl 1986 is a fictionalized retelling of that mission, which in and of itself ain’t a bad idea for a feature film, especially since this one is actually a Russian production. A film about history’s worst nuclear disaster, told by those whose own backyard came within a hair’s breadth of becoming a wasteland? That’s an interesting prospect.

The movie, however, is dull, laborious and criminally overlong. The entire first act is focused on rescue worker Alexey (Danila Kozlovsky, who also directed) trying to rekindle a relationship with former girlfriend Olga (Oksana Akinshina), who gave birth to their son 10 years earlier. Alexey comes across as a self-absorbed douchebag and we’re given no reason to care whether or not Olga takes him back. Unfortunately, he’s the main protagonist.

Interest level briefly picks up when - finally! - disaster strikes. The initial Chernobyl explosion and the immediate response by Alexey’s team is gripping and intense. Afterwards, however, the narrative keeps dropping the ball by repeatedly returning to Alexey’s interactions with Olga. It also turns out his son is mostly just a plot device to goad Alexey into action. He and a team of marginally fleshed-out characters eventually venture below to try and release the water valves...more than once.

Since the outcome of the operation is a foregone conclusion, one would naturally expect to become invested in who lives or dies. However, Alexey’s the only character given much background, meaning the rest are little more than fallout fodder. And unlike the miniseries, the film self-consciously steers clear of any incendiary particulars surrounding the disaster. So while the climactic operation is well-staged, it’s seldom very involving.

HBO managed to depict this chapter of the Chernobyl saga in a fraction of the time and never relied on manufactured melodrama to pad things out. Chernobyl 1986 tells a watered-down version of the same story, adding nothing new or revelatory  - not even interesting characters - which makes its existence is sort-of superfluous. And why settle for a simple vanilla cone when a scrumptious sundae is available?

MEH. LIKE SHARING THE BED WITH THE DOG.
Posted by D.M. Anderson at 9:14 PM