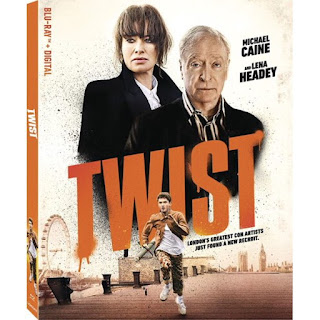 Sure, Michael Caine is a cinematic icon today, nabbing a slew of awards and nominations over his decades-long career. And yeah, he’s been knighted in Great Britain, joining such luminaries as Anthony Hopkins, Patrick Stewart and Elton John.

But I also remember the notorious “Paycheck Movies” era of his career, where he cashed-in on enormous audience goodwill by lending his good name to drivel like The Swarm, The Island, Beyond the Poseidon Adventure and Blame it on Rio, to name a few. And let’s not forget Jaws: The Revenge, after which he once cheekily remarked, “I have never seen the film. However, I have seen the house that it built, and it is terrific.”

That’s not to say Twist belongs with such legendarily bad company, but I am wondering if he’s planning on adding a few new rooms to his Jaws house. And despite top billing, Caine is not the actual star of the film. Nor is Lena Headey, the other notable name above the title. The real star is Raff Law, who looks and sounds uncannily like his father, Jude, but possesses a fraction of the onscreen charisma. As transient London graffiti artist Oliver Twist - yes, the film is a modern-day take on the Dickens story - he makes a pretty bland protagonist.

But that’s not entirely Raff’s fault. Director/co-writer Derek Owen seems more concerned about making these characters hip than giving any of them distinctive personalities. The plot has a batch of devil-may-care young adults working under the tutelage of Fagin (Caine) to rob from the rich and give to...well, themselves. Taking Twist under his wing, Fagin plots to steal a painting from an unscrupulous art dealer, who himself is actually a thief. The narrative moves from point A to point B without ever being engaging, despite efforts to spice things up with a cool soundtrack, gymnastic camerawork and endless scenes of Twist leaping across rooftops. The climactic heist is busy and loud, but undone by implausibilities and ridiculous action sequences.

Elsewhere, Headey is wasted in a thankless role as a psychotic partner who mostly exists in the story to sneer, scowl and threaten everybody. As for Caine...he shows up now and then, but is seldom part of the action and puts minimal effort into his own character, content to deliver his lines with adequate professionalism. He’s clearly not all that invested in the part and his indifference is contagious.

Twist is far from the worst film on Michael Caine’s resume - that well runs pretty damn deep - but with a half-assed story and drab characters, it’s seldom very involving. On the bright side, however, at least those house renovations should go off without a hitch.

MEH. LIKE SHARING THE BED WITH THE DOG.
Posted by D.M. Anderson at 8:49 PM