A DAY OF JUDGMENT: Retribution on a Budget 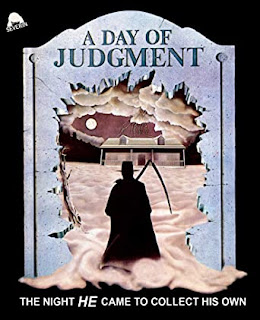 This obscure little oddity hails from the early ‘80s, just as the slasher movie craze was beginning to ramp up. But despite a tagline obviously created to evoke memories of Halloween, A Day of Judgment is a different animal. Regionally-produced and well made for what appears to be a very limited budget, it mostly plays like an unholy fusion of Southern Gothic, folk horror and the type of anthology films Amicus Productions was cranking out a decade earlier.

Until the laughably heavy-handed denouement, the only real narrative difference between this and, say, 1972’s Tales from the Crypt, is that the stories of retribution happen concurrently, with comeuppance dealt by a hooded, scythe-wielding figure who rides into a rural village in the dead of night. Coincidentally, all hell breaks loose after the town’s only priest has had enough of everyone’s godless bullshit and leaves. Our favorite bit involves a nasty old lady who’s literally dragged to hell for poisoning a goat...a wonderfully creepy sequence.

Elsewhere, the other stories and characters are nearly as interesting. Most performances border on amateurish, but the overall lack of thespian skill is offset by intriguing plotlines, solid direction and an unusual narrative structure that shouldn’t work as well as it does. Efficiently moving from one subplot to another and back again - repeatedly - until each has played itself out, we are constantly reminded that an ominous story arc looms large over everything, trying it all together at the climax.

Had the credits started to roll right then, we’d have a perfect ending. Instead, an unfortunate coda suggests the filmmakers have an moralistic - perhaps evangelical - agenda that belies the fun of watching these assorted assholes get what’s coming to them. Worse yet, this eye-rolling bout of sermonizing is presented with the subtlety of a mallet.

But that ain’t really a dealbreaker. Until then, A Day of Judgment serves-up economical-but-enjoyable slices of cryptic karma. In addition to a nice restoration, this disc also features a couple of interesting interviews with the producer and screenwriter, each discussing the film’s grassroots production history (as well as the screenwriter’s admitted agenda). After hearing their stories, one can’t help but admire what they were able to accomplish with such miniscule resources.

“TALES OF JUDGMENT" - Interviews with producer Worth Keeter and screenwriter Thom McIntyre.