HINTERLAND: A Murder Mystery for the Chemically Altered 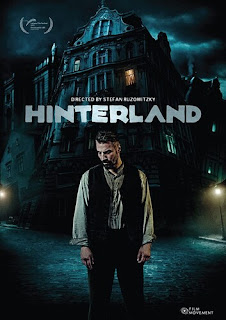 Throughout Hinterland, I kept thinking the same thing: This would be an awesome movie while tripping on shrooms. Not that I condone such a thing, of course, but the film’s visual surrealism would certainly enhance your high.

On paper, the film doesn’t sound like anything mind altering. After the end of World War I, Peter Perg (Murathan Muslu) is released from a POW camp and returns to Vienna, only to discover it’s a different place and he’s pretty much lost everything during the years he was away. His wife and daughter are gone, and even though he was a cop before the war, he’s more or less treated like a pariah by the police (mainly because they believe he’s a loyalist to Austria’s former monarchy).

Then one by one, his war buddies are being knocked off by a sadistic serial killer, in a variety of gruesome ways calculated to maximize their suffering. Though he's initially a suspect, Perg is recruited by the police to track down the killer. He learns that the murders are retaliation for a wartime incident of which he was involved, and the killer might even be saving Perg for last.

Hinterland tells a dark, brooding story punctuated by really brutal murders. But like Seven, the killer’s handiwork is shown after-the-fact, which lessens the blow but is still plenty disturbing. As Perg, Muslu turns in a quietly effective performance that suits his morose character.

Though the story maintains interest, what really makes Hinterland worth checking out is how it looks. The locations, backgrounds and Vienna itself appear almost Daliesque, as if Toontown had gotten an extreme makeover by Judge Doom (apparently, nearly every scene was accomplished with blue screen technology). Unless intended to represent how Vienna has changed while Perg was away, I’m not sure what purpose the whacked-out production design serves, but the overall effect is stunning…even without shrooms.

Somber, moody and maybe a bit cynical, Hinterland makes up for the more meandering moments - Perg’s uncertainty over seeking out his family - with an expressionist aesthetic, giving the film a darkly surreal look that definitely reflects the tone.