CLERKS III Preaches to the Converted 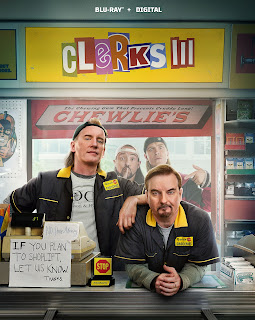 When you load this disc, Clerks III writer-director Kevin Smith pops up to address the audience directly, thanking them for their purchase and support of physical media. While it’s obvious Smith loves both the film and the format, he’s sort of preaching to the converted. Still, his ego-free sincerity has always been part of his charm.

It’s also obvious Smith still loves the characters he created 30 years ago, now older but not necessarily wiser. Aside from opening a weed dispensary next-door to the Quick Stop, Jay (Jason Mewes) and Silent Bob (Smith) haven’t changed one whit. But whereas these two were amusing asides in the original Clerks (and other View Askewniverse films), their schtick has grown pretty stale...and kind of intrusive here.

Quick Stop owners Dante (Brian O’Halloran) and Randal (Jeff Anderson) haven’t changed much, either, at least until the latter suffers a near fatal heart attack and takes stock of his life, deciding to make a movie about his years behind the counter. That particular plotline turns Clerks III into sort of a meta movie about the making of the first film. Meanwhile, Dante is undergoing a few crises of his own, still mourning his wife, Becky (Rosario Dawson), who was killed in a car crash in the interim since Clerks II.

Death actually looms pretty large in Clerks III. While still amusing, an air of melancholy hangs over most scenes, not just its main characters pondering their own mortality, but the unspoken realization that maybe they’ve wasted their lives. At the same time, themes of friendship - even when severely tested - are apparent throughout the film, particularly in the poignant final act.

It helps, of course, to be an Askewniverse fan who loves these characters as much as Smith does. While seeing Clerks and Clerks II isn’t necessarily a prerequisite, many of the characters and their actions won’t mean much if you didn’t grow up with these guys. Still, Smith does a good, heartfelt job providing closure for them.

CLERKS III DOCUMENTARY - Nearly as long as the movie itself.

WE’RE NOT EVEN SUPPOSED TO BE HERE: 3 DECADES OF CLERKS