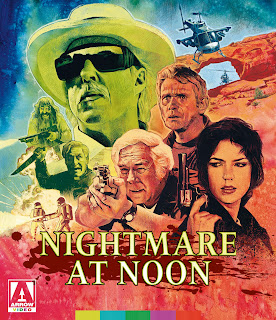 Writer-director (and semi cult legend) Nico Mastorakis must have gotten a hell of a deal on used cars. Maybe he saved some cash buying in bulk because he smashes and blows up a shitload of ‘em in Nightmare at Noon, even in scenes where vehicular mayhem isn’t really required.

For example, the film is about a loony albino scientist (Brion James) who taints a small town’s water supply with a chemical that turns people into violent psychopaths (for reasons never explained). In addition to a few murders, we see two infected drivers intentionally hit each other, and as they’re getting out of their cars to start fighting, another approaching driver speeds up to plow into them. Though the two wrecked cars don’t budge (!), the third one explodes (?) and flies fifty feet through the air.

Okay, maybe that’s a bad example. We can just chalk that up to piss poor execution of a stunt. So how ‘bout this…

Once most of the town is either infected or dead, the Albino’s henchmen arrive in vans wearing hazmat suits and armed with flamethrowers. Naturally, we assume they’re there to cover up their experiment by burning the bodies. Instead, they walk the streets torching parked cars - and nothing else - as our protagonists look on in horror. Then there’s the big drive-in theater shoot-out, which includes one of the infected getting torched by a flamethrower, after which he stumbles to one of the Albino’s vans and crawls in back. The van then explodes. Too bad, actually, because comparatively speaking, it was a pretty cool set o’ wheels.

But the funniest car-nage comes near the end. By this time, our heroes and villains are all on horseback in the desert. At first, I thought Mastorakis must have run out of vehicles, but it turns out he was saving a few for the climactic aerial dogfight, with an army chopper trying to take down the enemy. Nearly every time they shoot & miss, the rockets destroy abandoned vehicles that just happen to be sitting in the line of fire.

Elsewhere, Nightmare at Noon is a daffy slab of low budget sci-fi horror. Though brimming with exuberance, it’s ridiculously plotted, logic free and often hilarious. Granted, most of the laughs come at its own expense, but at least the movie’s never boring. The cast features a batch of B-movie stalwarts. Bo Hopkins comes off best, perhaps because he’s the only one who doesn’t appear to take his role seriously. Conversely, Wings Hauser is hilariously awful, but in his defense, his character is saddled with the dumbest dialogue (he was probably hammered, too, as the director attests in one of the bonus features).

Ultimately, Nightmare at Noon is a prime cut of bad movie mayhem and a must-see for those who go in for this sort of thing...or anyone who enjoys watching cars explode. Arrow Video serves it up with a decent transfer and a small selection of interesting bonus features.

THE FILMS OF NICO MASTORAKIS: NIGHTMARE AT NOON - A retrospective doc, with interviews and vintage footage.

BEHIND THE SCENES CUTS OF NIGHTMARE AT NOON