THE BANSHEES OF INISHERIN: What's a Few Fingers Between Friends? 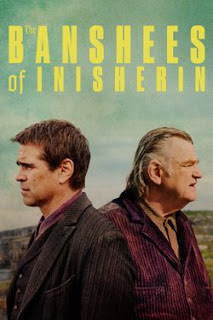 If the island of Inisherin were a real place, you’d never want to live there. The skies are perpetually gray, an Irish civil war is raging on the mainland just across the bay and there doesn’t appear to be any kind of discernible economy. And save for Padraic (Colin Farell), who ain’t the sharpest crayon in the box, no one in this sparsely populated community seems particularly happy.

Padraic’s life consists of simple routine…tending to his animals and spending days at the pub with his best friend, musician Colm (Brendan Gleeson). He lives with his sister, Siobhan (Kerry Condon), the more responsible of the two, who is quietly desperate to leave Inisherin for a better life.

Then without explanation, Colm doesn’t want to be friends with Padraic anymore, which shocks everyone because Padraic is congenial, generous and liked by everyone. It devastates Padraic, especially once Colm makes good on his threat to start cutting off one of his own fingers every time Padraic speaks to him. Colm does eventually reveal - to Siobhan - the reason for his sudden dislike of his lifelong friend, which not only escalates the conflict, but renders Padraic something of a tragic figure. Colm, who believes Padraic is stifling his creativity, becomes the film’s defacto antagonist.

But The Banshees of Inisherin focuses less on the hows and whys of this crumbling friendship than on the effect it has on its characters, Padraic in particular, who feels utterly helpless. In fact, helplessness seems to be an underlying theme throughout the narrative, as conveyed through some of the secondary characters as well. The film is frequently funny, but often disheartening, and as the story unfolds, we’re increasingly certain - long before the final act - that nobody is going to end up happy.

Still, the two main characters are interesting and wonderfully realized by Farrell & Gleeson. Though distressing, the changes Padraic undergoes are fascinating. He becomes increasingly disillusioned, to say nothing of lonely. It’s for that reason the film is worth seeing, if only once. I don’t think I’d be compelled to experience the end of this friendship a second time.