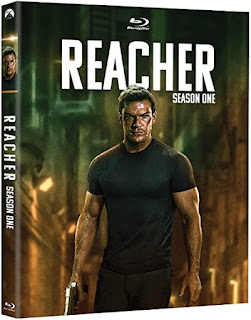 Two things kept me from canceling my Amazon Prime account this year. First was the free shipping when Christmas shopping. Prime may be increasingly expensive to renew each year, but still pays for itself during the holidays and I’d rather eat a case of dog food than go near a mall or store in December.

Second was my curiosity over Reacher, an eight episode adaption of Killing Floor, one of the novels in Lee Child’s hugely popular Jack Reacher series. I haven’t read any of them, but really enjoyed the two earlier films starring Tom Cruise, though a lot of fervent fans felt he was totally miscast (mostly because of his size). A different take on the same character might be interesting.

I’m glad I held onto my account because Reacher is a great show, one of the best I watched all year. Is it better than the movies? I dunno…I try not to compare movies to television shows because I view them as two different mediums. What I do know is this one takes advantage of the series format to dive a little deeper into the title character’s personality and history, so he remains enigmatic to the other characters, not to us.

Based on what friends who read the novels have told me, Alan Ritchson is more like the Jack Reacher they pictured…huge, imposing and more of a free-spirited drifter. Not to dismiss Cruise’s interpretation of the same character, but we never feel like we’re watching anyone but Tom Cruise. Perhaps because he’s not as well known, Ritchson embodies Reacher more effectively. He never seems like a man on a mission…just a congenial loner who stumbles into a situation and is able to use his considerable deductive skills - and ability to kick major ass - when required.

The story itself unfolds more like a novel than the movies did, taking its time to introduce most of the major characters. Over the course of eight episodes, the show feels like a pretty faithful adaptation, though I wonder if the antagonists are all as one-dimensional in the book as they are here. As played by Bruce McGill, corrupt mayor Grover Teale is practically a caricature, like an evil Colonel Sanders. Conversely, Roscoe (Willa Fitzgerald) and Oscar (Malcolm Goodwin) are great characters…two local cops who reluctantly end up assisting Reacher. The former also ends up as a love interest, but at least that subplot doesn’t feel shoehorned in.

Elsewhere, Reacher is complexly-plotted, smart and sometimes pretty damn funny. Featuring exhilarating and violent action, these eight episodes are not-only bingeworthy, they leave the viewer looking forward to another season. Fortunately, there are two dozen more novels waiting in the wings. Best of all, this three-disc Blu-ray set means we don’t need Amazon Prime to enjoy it.