Digging Up New Friends in THE LONELIEST BOY IN THE WORLD 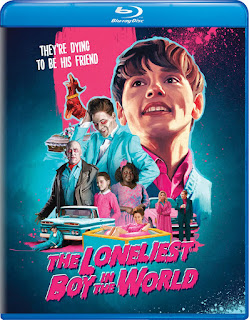 But what’s this? A modern movie set in the 80s that doesn’t half its running time poking fun at the decade? No way! In fact, aside from a couple of songs and some creative set design, there’s no discernible reason why it takes place in the 80s.

And a zombie comedy that isn’t chock full of cartoon gore gags and “quirky” characters fighting the undead with “funny” weapons? Surely not! But a few gross bits notwithstanding, the zombies are benign and kind of sweet. Not only that, there isn’t a single gut-munching scene to be found (though one part featuring regurgitated cheese is kinda nauseating).

The Loneliest Boy in the World begins with a twisted premise. Introverted, housebound teenager Oliver is all alone after his mother dies, but has never really interacted with others and seems incapable of taking care of himself. A few social workers give him a week to make at least one friend or else they’ll have him committed. After attempts to meet new people don't seem to be working out, Oliver exhumes a few fresh corpses and brings them home. When they inexplicably become reanimated, not only does he regard them as his family, they return the affection in kind.
One would assume blood-soaked hilarity to ensue as Oliver’s forced to keep his secret from the authorities and community, but it’s Halloween season and his new family fits right in. Instead, the story goes in unexpected directions that, while not always especially funny, are fairly engaging…even charming at times. Oliver’s “mom,” “dad” and “best friend” Mitch (Hero Fiennes Tiffin) offer advice and encouragement, which in-turn gives him confidence to not-only pursue romance for the first time, but stand up to those who’ve been bullying him. The story is buoyed by a sympathetic performance from Max Harwood, who resists the inherent temptation to depict Oliver as crazy.

The Loneliest Boy in the World rarely ventures into horror territory, not even of the splatstick variety. Though there are some amusing gags here and there, there's a bigger emphasis on Oliver’s friendships and personal growth, which results in a climax that’s surprisingly bittersweet. Nobody’s gonna walk away thinking they've just seen a classic, but at least it’s not another tired parody of zombie movies and 80s tropes. Without such preconceived expectations, the film is pretty enjoyable.