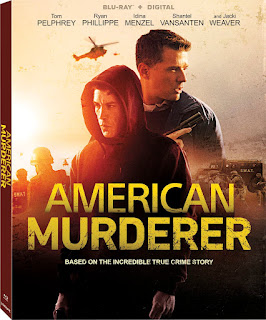 For those unaware, Jason Derek Brown was a narcissistic con man who bilked a whole lot of people out of money, ran up massive debts and resorted to robbing an armored car, executing the driver. It was all to maintain the extravagant lifestyle he’d grown accustomed to and eventually landed him on the FBI’s Ten Most Wanted list. Sounds like it would make a great movie, right?

But American Murderer doesn’t spend much time chronicling Brown’s life, questionable career choices or what made him such a skilled swindler. As the film begins, he’s already trying to stay a step or two ahead of loan sharks, creditors and the FBI. While watching this self-absorbed douchebag’s downward spiral is sometimes morbidly fascinating, we’re never privy to how he became such a clever crook in the first place. It's soon obvious that we could probably Google more about Brown than the film is gonna offer. Tom Pelphrey plays him well, but since his character displays zero empathy or remorse, we pretty much hate him from the get-go. That would be fine if the film offered an engaging foil.

Instead, we get stone-faced FBI agent Lance Leising (Ryan Phillippe). He’s mostly just a plot device to set-up numerous flashbacks, which are sometimes convoluted because they are often presented out of sequence and it isn’t always clear when particular scenes actually occur in the story. Because of this, the narrative is too choppy to develop any real momentum, not helped by the fact none of the characters besides Brown are remotely interesting.

The film culminates in a final act with Brown on the run, authorities hot on his tail. However, the chase peters out to an anti-climactic finish. While such an ending certainly reflects what really happened, it’s pretty drab from an entertainment perspective. American Murderer is fast-paced, but offers no meaningful insights on Brown or those affected by him, ultimately becoming just a checklist of events you could read on Wikipedia. Dust of your old copy of Catch Me if You Can, instead.