THE ROUNDUP and the Unlikely Action Hero 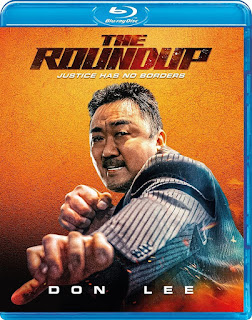 How good is The Roundup?

It’s a sequel to another South Korean film, The Outlaws, which I haven’t seen. After watching this one, I immediately jumped online to see where I could find the first film. Though I couldn’t nab a physical copy at a price I was willing to pay, at least it’s available digitally and is now part of my weekend plans. If not the best action film I’ve seen this year, The Roundup is certainly one of the most entertaining.

Ma Dong-seok (aka Don Lee) is terrific as detective Ma Seok-do. Like his scene stealing supporting role in Train to Busan, he doesn’t look or act like your typical man of action. Large & lumbering, he’s extraordinarily funny while kicking serious ass. The scenes featuring Ma working with his boastful, beleaguered captain, Oh (Heo Dong-won), are a welcome antithesis to the film’s brutal violence, most of it perpetrated by sadistic, cold-blooded kidnapper, Kang (Son Seok-koo), one of the nastier movie villains I’ve seen in a long time.

Initially, Ma and Oh are simply traveling to Vietnam to bring back a prisoner who just turned himself in. After Ma interrogates him, the man reveals he worked for Kang and assisted in kidnapping the son of a corrupt tycoon, Choi, but now fears for his life. When bodies start piling up - including mercenaries hired by Choi to steal back the ransom - Ma and Oh try to track him down. Everyone ultimately ends up back in Korea, where Kang kidnaps Choi this time and demands an even bigger ransom.

The narrative is fast-paced and constantly engaging, bolstered by great dialogue and supporting characters who are either amusing & likable or deliciously evil. Director Lee Sang-yong deftly balances comedy and tough action, with Dong-seok at the center of it all. Though he doesn’t look the part, he’s a great physical actor, even when taking on guys half his age (and size)...

...and we haven’t seen the last of Ma Seok-do, either. It turns out The Roundup is just Part Two of a series, with another sequel scheduled to be released next year. As long as Ma Dong-seok keeps returning, so will I.

That’s how good The Roundup is.