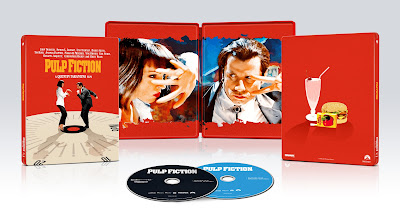 Pulp Fiction still feels like a brand new movie, even though I’ve revisited it at least once a year since it first knocked my socks off almost three decades ago (Christ, has it been that long?). Like other films on my all-time favorites list - a close #2 behind Jaws - I’ve owned it in every format.

Now it’s in 4K, available with both traditional packaging and this nicely designed SteelBook, and I couldn’t be happier. If you’re like me, you tend to collect movies much like voracious readers hoard books. For most novels, the paperback will do, but it’s nice to have hardcover editions those ‘special’ books - classics, personal favorite authors, etc. - proudly displayed on a bookshelf, not just as home decor, but because, in a way, they sort-of define you.

SteelBooks are the hardcover novels of physical media, and when at all possible, it’s nice when those special movies - ones that represent more than just another disc in your collection - get released with solid packaging and brand new artwork. The vivid minimalist art created for the Pulp Fiction SteelBook creatively represents the tone, imagery and cultural impact of Quentin Tarantino’s career defining film.

But the 4K disc, man! How does the movie look in 4K? Are there any new bonus features? Is it worth the upgrade?

For those who don’t care about aesthetic accouterments and love the film itself, absolutely. Pulp Fiction has looked better with every physical format. Since the Blu-ray edition already sports a great picture, the difference in the 4K is a little less pronounced. Still, the right home theater system will reveal a sharper overall image, with deeper black levels and more vivid contrast. The 5.1 DTS audio is identical to the Blu-ray disc, which sounds great. The bonus features, while substantial, are all carried over from previous releases.

Anyone reading probably doesn’t need to be reminded what a great film this is. Not only does Pulp Fiction remain the director’s magnum opus, but it’s also one of the best American movies of the past 30 years, if not the best. Tarantino’s exuberance and love of cinema are obvious in every frame, making it a joy to revisit, especially in 4K.

NOT THE USUAL MINDLESS BORING GETTING TO KNOW YOU CHIT-CHAT - Retrospective interviews with the cast & crew.

HERE ARE SOME FACTS ON THE FICTION - Critics roundtable.

THE TARANTINO GENERATION - Segment from Siskel & Ebert at the Movies, where the two critics discuss Tarantino's impact on cinema.

MARKETING GALLERY - A huge collection of trailers from around the world, TV spots, posters & trade ads.