BLOOD & DIAMONDS: Not as Exploitative as it Looks 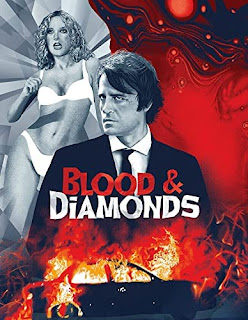 Not quite a poliziotteschi film, Blood & Diamonds is a 1977 Italian crime thriller cut from a similar cloth.

Guido Mauri (Claudio Cassinelli) is a jewel thief caught and sentenced to five years in prison. Upon release, he vows to get even with mob boss Rizzo (Martin Balsam), who he believes set him up. He’s also convinced Rizzo is behind an attempt on his life, which resulted in the death of his girlfriend, Maria (Olga Karlatos). So Guido decides to steal a cache of Rizzo’s diamonds, made more complicated by sadistic corrupt cop Tony (Pier Paolo Capponi) and dancer Lisa (Barbara Bouchet), who could be seen as the film’s femme fatale (the story does include film noir elements).

The plot moves in fits and starts, regularly wavering between intriguing and unnecessarily complex. However, the narrative takes a few surprising turns, especially a major one near the end that not-only changes how we view Rizzo, it reveals the fallibility of Guido’s single-minded quest for revenge. Elsewhere, Blood & Diamonds shares a few traits of Italian poliziotteschi flicks popular at the time, but overall, it’s far less exploitative, Bouchet’s gratuitous go-go dance being a noteworthy exception (one of the goofier highlights).

As Guido, Cassinelli is required to do little more than scowl. While his expression hardly changes throughout the film, it suits the perpetually morose character just fine. The great Martin Balsam isn’t actually in the film a whole lot - mostly barking orders from behind a desk - but makes the most of a small but pivotal role. Bouchet and Karlatos provide some agreeable eye candy, though neither character is particularly vital to the story.

Blood & Diamonds is a decent Italian crime thriller that might disappoint poliziotteschi fans expecting something more lurid, but the story features a few unexpected twists and comes to a surprising conclusion. Considering its relative obscurity on this side of the pond, 88 Films provides quite a few excellent bonus features - including a poster! - to go along with a solid 4K restoration of the movie itself.

DOWN BY DI LEO: A JOURNEY OF LOVE - Feature length doc about director Fernando Di Leo.

BLOOD & DI LEO - Interview with Luc Merenda, who worked often with the director, but doesn’t actually appear in this film.