CREATURE FROM BLACK LAKE: From the Golden Age of Bigfoot 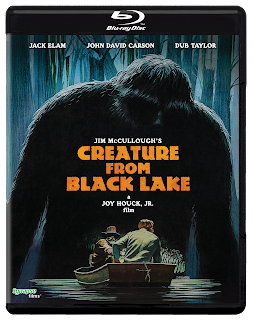 Bigfoot movies were all the rage back in the ‘70s, especially for would-be moguls whose pockets weren’t very deep. All they really needed was a wooded setting, a big guy in an ape suit and maybe an aging character actor (or two, if the budget allowed). Since it was always fun to believe such a creature was real, the concept alone would likely attract enough kids to turn a decent profit.

Hence, we got a lot of pseudo-documentaries and regionally-produced fright flicks with such enticing titles as Sasquatch - The Legend of Bigfoot, Shriek of the Mutilated, The Mysterious Monsters and The Legend of Boggy Creek, the last of which has since become a minor cult classic. Even those where the killer critter in question wasn’t actually referred to as Bigfoot were commonly understood to be Bigfoot movies.

Another such film is 1976’s Creature from Black Lake, written and directed by Joy N. Houck Jr., who never graduated to the A-list, but did manage to nab a couple of legendary character actors for this one. Dub Taylor shows up for a few scenes to do his backwoods hillbilly schtick, while top-billed Jack Elam earns his paycheck as perpetually-hammered swamp-dweller Joe Canton, who witnessed the monster killing his buddy (though no one believes him). Elam’s performance is over-the-top and a lot of fun…the best part of the movie.

Unfortunately, the actual stars are John David Carson and Dennis Fimple as two dull college students who travel south to research whether or not the creature exists. But since almost nobody wants to talk about it, we end up watching these jokers go camping, hook up with a couple o’ local girls, piss off the sheriff and argue with each other. Things liven up in the final act when the creature returns to bash these guys around a bit, but until then, the movie’s sort of slow.

But while never particularly memorable, Creature from Black Lake is far from the worst Bigfoot flick of the era and pretty well made for the budget, featuring fine cinematography by none other than future Carpenter collaborator Dean Cundey. His skill really makes the swampy backwoods look like a foreboding place, especially with this excellent 4K restoration.

SWAMP STORIES - A short but enjoyable interview with cinematographer Dean Cundey, arguably the most recognizable name behind the camera.