More is Less in BLACK ADAM 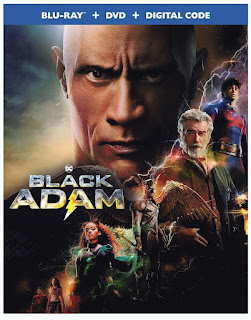 On one hand, Black Adam is violent, destructive fun whenever Dwayne Johnson is on the screen. As the titular character, he flies, glowers, wastes bad guys by the bushel and causes millions in property damage. Say what you will about his range - or lack of - Johnson is a tremendous on-screen presence and gifted at picking films that suit his abilities. In that respect, Teth Adam is a role he was born to play.

On the other hand, Black Adam operates on the conceit that the audience is already familiar with the entire DC Universe…not just the movies, but the comic books themselves. When Teth Adam is resurrected after 5,000 years to use his God-like powers defending his home country of Kahndaq from mercenaries led by power-mad Ishmael Gregor, the Justice Society is tasked with reigning him in because killing people (even bad guys) is not heroic.

And who are the Justice Society? They’re four superheroes from a comparatively obscure DC comic - predating the Justice League - who arrive during the second act with almost no context. The film does a great job depicting the origins of Teth Adam, but Doctor Fate (Pierce Brosnan), Hawkman (Aldis Hodge), Atom Smasher (Noah Centineo) and Cyclone (Quintessa Swindell) are introduced as though their personalities and skills were previously established in a film DC simply forgot to make. So while they have enough screen time to almost make Black Adam an ensemble piece, only those well-versed in DC lore will appreciate them. For everyone else, they are simply plot devices (and not very interesting ones at that).

Black Adam is certainly more fun than Batman v. Superman and Justice League, but similarly bloated with characters who probably should have gotten their own movie before being shoehorned into this one. The average viewer shouldn’t have to rely on the disc’s bonus features to know the Justice Society's backstory. However, Adam himself is an engaging antihero and Johnson's great in the role. When focused on his penchant for punishment and less on superfluous universe building, the film is fairly enjoyable.

FEATURETTES - “The History of Black Adam”; “Who is the Justice Society?” (if you don’t know who the hell they are, you might want to watch this first); “From Soul to Screen”; “Black Adam: A New Type of Action”; “Costumes Make the Hero”; “A Flawed Hero”; “New Tech in an Old World”; “The ROCK of Eternity”; “Taking Flight”; “Kahndaq: Designing a Nation”.